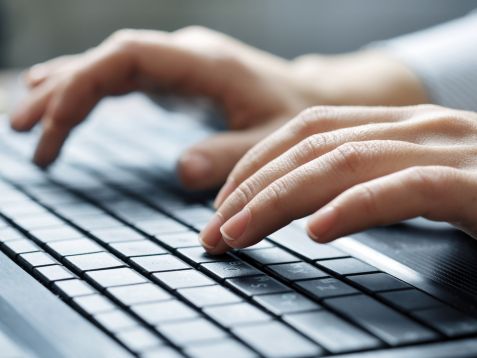 Another democratic election has been recently held in Ukraine, as the country celebrates its twenty years of independence. The subject quickly gained internet users’, in Ukraine and beyond. And what websites do the country’s citizens visit most eagerly? Gemius analysts have studied data from September 2014.

What it shows is that the search engine by Google enjoys the greatest interest among all sites in Ukraine. It is used by seven out of ten online audience members (12.84 m). The Russian engine’s site, Yandex, records one and a half times less visits (8.57 m). Over a half of Ukrainian internet population go to Mail.ru, which is a portal offering a search engine as well (9.58 m).

“Over the past few years Google consequently ranked first. Recently there has been a downward trend in the activity recorded on the Russian sites. This is also true for the services that for many years were in the top ten most popular sites among the Ukrainian audience: Mail.Ru, Odnoklassniki, Yandex” comments Lesya Prus, head of Ukrainian branch of Gemius and an online industry expert.

Based on the data, it is quite evident that Ukrainian online population are very much into social networking sites. The most popular being Vk.com, attracting six out of ten users (11.57 m). Almost half that number go to Facebook (6.11 m). Every third Ukrainian internet user browses through Odnoklassniki.ua (5.15 m).

“The drop in the activity on the social network Odnoklassniki started in summer 2013, but visits to Yandex and Mail.ru started declining in winter 2013, coinciding with the onset of political unrest in Ukraine. The share of the Ukrainian audience since December 2013 on the Russian search engines has decreased by 4 per cent,” says Prus.

The analysis also allows to conclude that websites offering entertaining content are popular as well. YouTube is visited by nearly half of internet audience (8.76 m), and almost every third user (5.28 m) goes to Megogo.net, where films and video materials are made available.

One third of audience enter Wikipedia

Wikipedia too gets some considerable interest among Ukrainian internet users. The website is visited by every third online individual (6.07 m). Slightly less popular is a platform offering free hosting – Ucoz.ru (5.47 m). 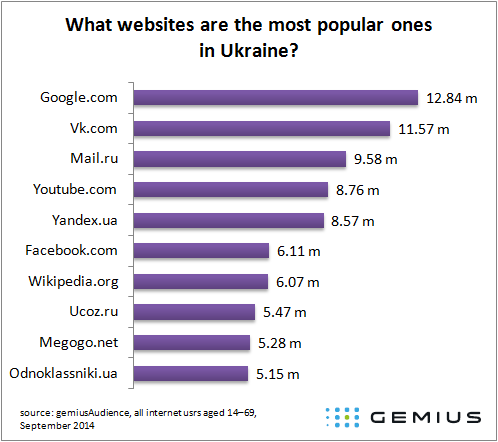 Contrary to the Ukrainian online population, Russian internet users opt for their own search engine (Yandex), rather than Google. However, in both these countries, the social networking site Vk.com enjoys interest of the majority of internet users. And what other websites are most popular in Russia? The answer to this question can be found in the press release titled “Favourite websites of Russian internet users”.