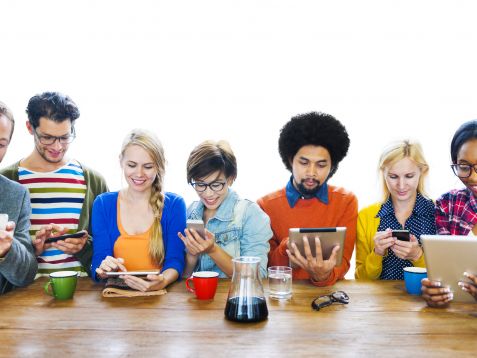 In certain countries Instagram attracts younger users than Facebook. Curious about the age of social media users in Russia, Poland, Romania, Belarus, Ukraine or Turkey? Read on to learn more about the most recent analysis by Gemius.

For publishers and advertisers social media is a valuable channel of communication with potential customers, especially if they are familiar with the detailed profiles of users of a given websites. Gemius decided to find out the ages of internet users on Twitter, Facebook and Instagram. The analysis included internet users over 18 years of age, in six selected countries where Gemius conducts research on data coming from the entire internet, i.e. Belarus, Poland, Russia, Romania, Turkey and Ukraine. The average monthly data for 2014 was taken into consideration.

In all the analysed countries, that is Russia, Poland, Romania, Belarus and Ukraine, Facebook users between 25 and 34 years of age constitute the largest share of visitors among all the other age groups. In turn, for the countries mentioned, almost every second Instagram visitor is between 18 and 24 years of age. In Russia, Ukraine and Belarus they account for 47 per cent of users, while in Poland and Romania – 43 per cent.

Krzysztof Majkowski, a business consultant at Gemius, comments on these findings in the following way: “Instagram is slowly gaining more popularity among young consumers and is taking the place of Facebook. It shows that it was a good move for Facebook to buy Instagram, which appeals more to the young generation and satisfies its needs, especially if we understand the importance of visuals and simplicity of message in the modern world. In turn, this channel of communication exhibits great potential for establishing relationships with consumers and building brand awareness.”

According to Majkowski, the popularity of Twitter among young internet users in Russia and Belarus may be related to the need for an independent channel of communication, as was the case during the Arab Spring – if we, of course, look at it from an appropriate perspective.

In Turkey, social media is favoured by the youth

Gemius also conducts research on the Turkish internet. This market was included in the analysis as it has an economic and cultural impact on the countries of Central and Eastern Europe. The data shows that the age structure of Turkish internet social media users is comparable to that of Central and Eastern Europe when it comes to websites of this kind. Yet, in Turkey, three out of ten internet users are between 18 and 24 years of age, whereas in the other analysed countries it is two out of ten.

The data comes from an international research project conducted by Gemius in nearly 30 countries in Europe, the Middle East and North Africa (gemiusAudience). It aims to determine the number and demographic profile of internet users and to learn about the ways in which they use the net: websites, audio and video material, or applications. The research is carried out in compliance with the international code of conduct ICC/ESOMAR. In Poland, it is carried out under the name of Megapanel PBI/Gemius. In Turkey, the research is conducted under a project entitled Internet Audience Measurement Turkey.