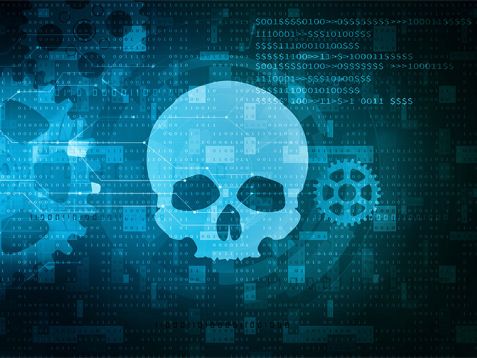 Gemius, together with Clear Sky Anti-Piracy Initiative, checked how Ukraine is coping with the issue. The study (gemiusAdhoc) was conducted on 607 representatives of the Ukrainian Internet users aged between 18-55 (except Donetsk, Lugansk regions and Crimea), in July-August, 2018.

The awareness of illegal video content among Ukrainian users

Although the percentage of the Internet users in Europe downloading or streaming illegal content online has decreased significantly from 2014 to 2017 (according to the Global Online Piracy Study), many European countries are still struggling with the piracy problem. Streaming illegal video content is very common in Ukraine. 63 per cent of the respondents admit that they are facing ban from rightholders to watch video online. At the same time, it is not an easy task for Ukrainian users to determine if the content is legal. 36 per cent of users state that they do not know how to make that distinction. The awareness is higher among men – 43 per cent of them are able to distinguish illegal video from licensed content, while the percentage was two times lower among women. Ukrainian users recognise legal content by copyright information like license agreement or links to authorship placed on the website (33 per cent of responders). One-fifth determine by content quality (20 per cent) and requirement to pay (18 per cent). 12 per cent of users rely on their intuition or simply believe the information on the site. 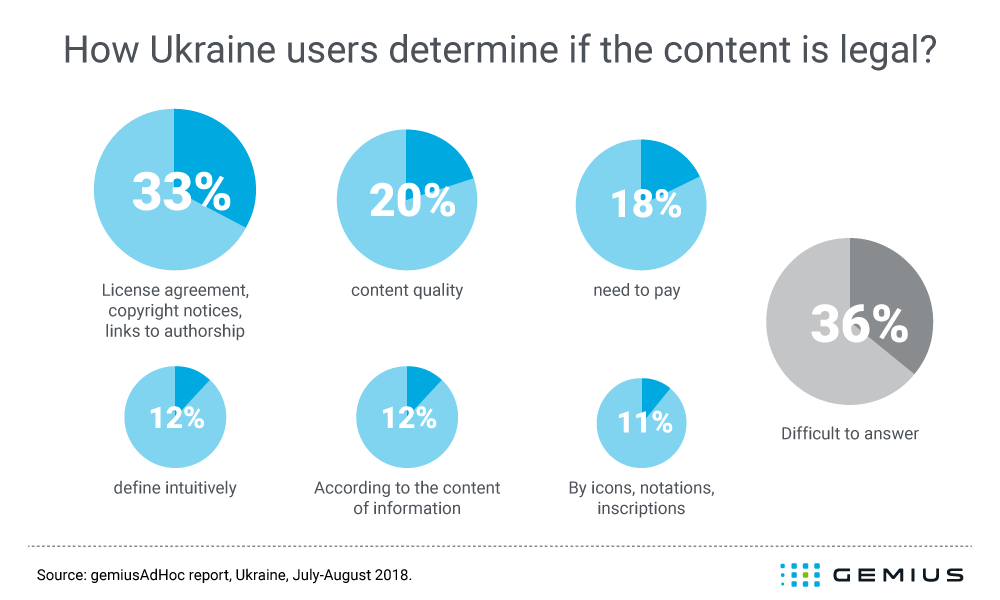 Ukrainian users: it is necessary to fight against illegal content, but…

89 per cent of respondents agree it is necessary to fight with illegal content distributed online. When asked how the situation could be altered, 39 per cent of respondents expressed their wish to have sites with safe and legitimate content where users will be able to download it for free. 23 per cent of users believe that the solution could be obligation to pay a small fee. Only 11 per cent of users confess that fighting against pirate content is not necessary. Among them, 41 per cent declared the video content’s high price as the contributing factor. 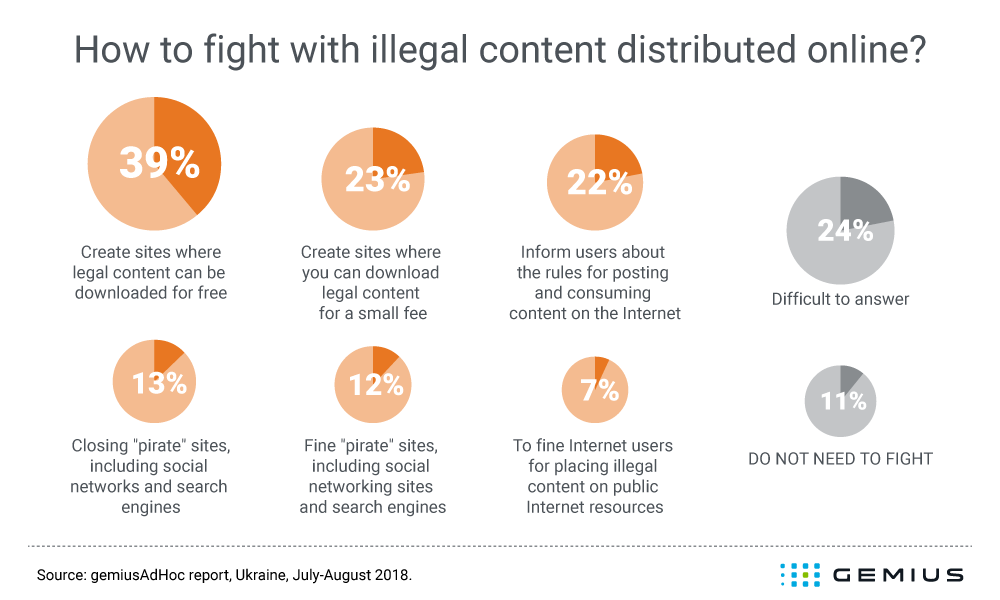 Although the majority thinks that fighting against piracy is important, the percentage of users ready to pay for legal content is much lower. Only 14 per cent of the Ukrainian Internet users agree to pay for access to legal video content. 59 per cent are reluctant to do so. Among them, 42 per cent think that the payment for the Internet connection is enough big of a cost, 38 per cent state that services streaming legal content are too expensive. 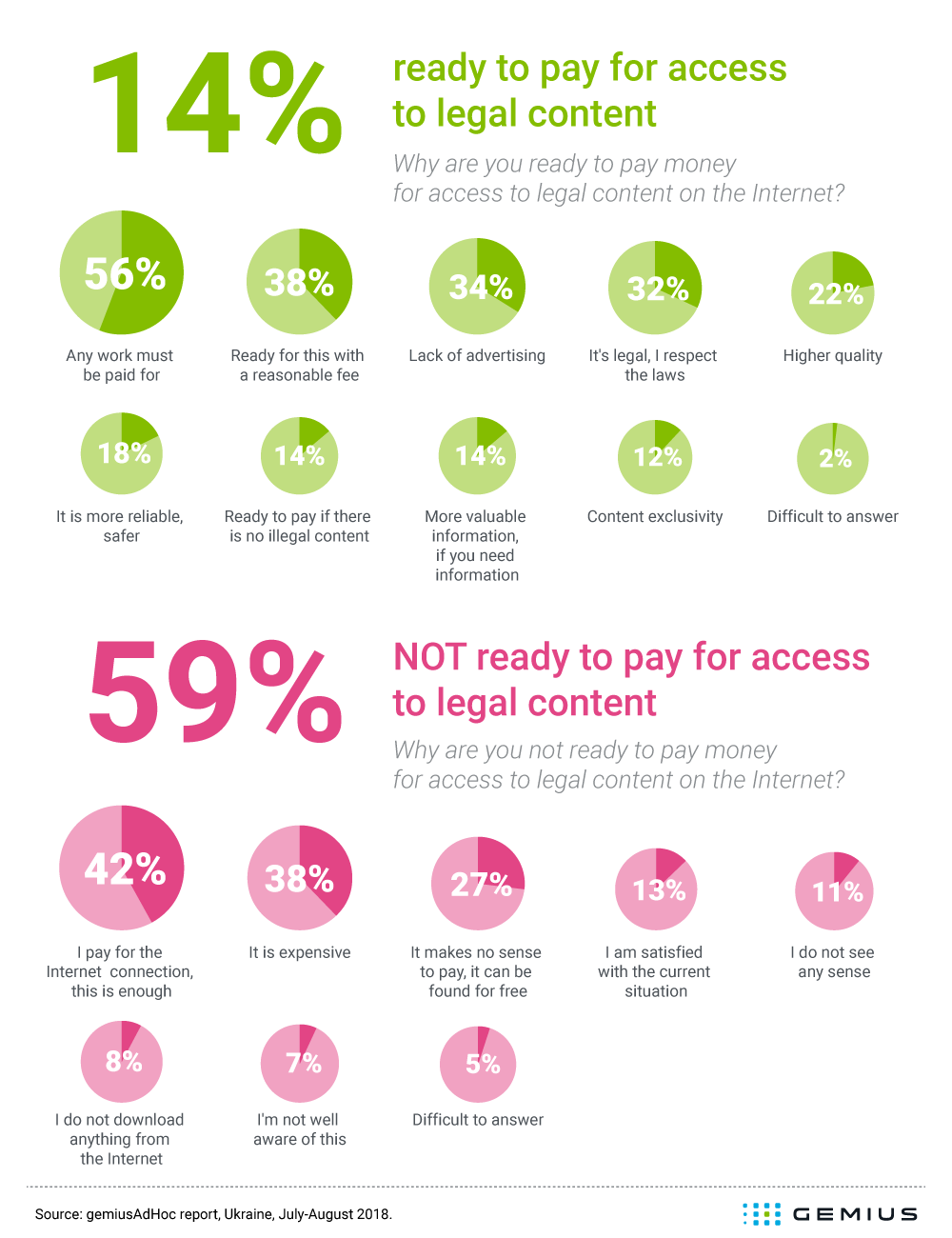