One in two employees has encountered workplace discrimination

According to the research, which is representative of the online Hungarian community aged over 15, 52 per cent of employees reported that they had encountered negative discrimination at the workplace, and of these one in two had personally experienced negative discrimination. The 52 per cent figure is very high in comparison with the European results; according to an international study, the Western European average is around 35 per cent.

A third of employers are not open-minded

While the vast majority of future employees, namely current pupils and students, said that they would prefer to work at an open workplace, according to the present employees this is not true for a third of employers. As much as 83 per cent of pupils and students said that they would like to work at a workplace where the fundamental corporate value is that employees and partners are judged solely on the basis of their actions and their work performance, without regard to their age, sex, gender, sexual orientation, national or ethnic background, political convictions, religious or other beliefs, physical abilities, or other characteristics.[nbsp

Roma and LGBTQ people are the groups most rejected by colleagues

The research also looked at the extent to which employees are ready to accept one another at the workplace. The groups most rejected by their own colleagues are the Roma and LGBTQ people (according to international research, the latter make up 5 to 8 per cent of the society) by a clear margin. Employees would least like to have members of these two groups as colleagues, subordinates or managers. More than two-thirds of employees (69 per cent) said they would not accept an LGBTQ person as their manager. Even fewer employees (24 per cent) would accept a Roma person as their manager. More than half of employees would not want to be the manager of a LGBTQ (56 per cent) or Roma employee (54 per cent). 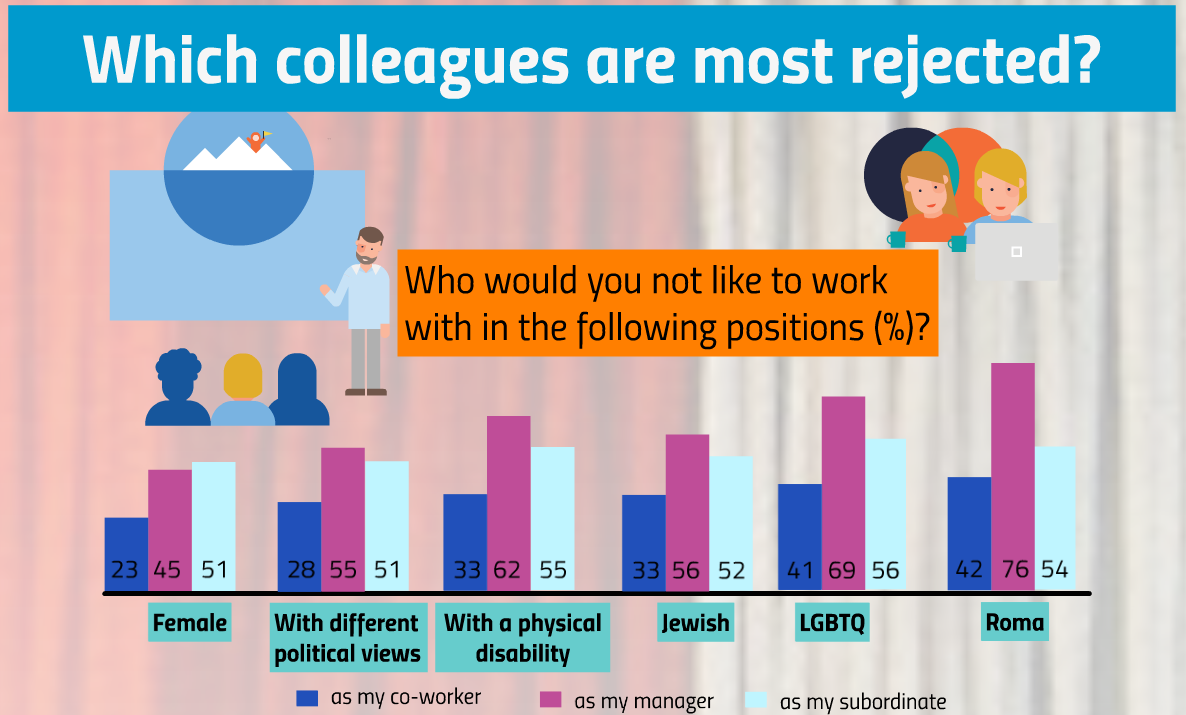 The research also revealed that being open makes business sense for companies and organisations. Those respondents who thought that their employer regards it as a fundamental value that others are judged solely on the basis of their actions and achievements, without regard to other characteristics, were happier at their workplace and more committed.

The research is representative of the online Hungarian community aged over 15. The sample size was 2,500 people. The questionnaire survey was performed using the CAWI pop-up method between 20 and 27 July. The research was carried out by Gemius, a member of the We’re Open community, with the support of Index and Sanoma Media Budapest, which are also members of We’re Open.