Consumers in 2018: watching TV with smartphone in hand 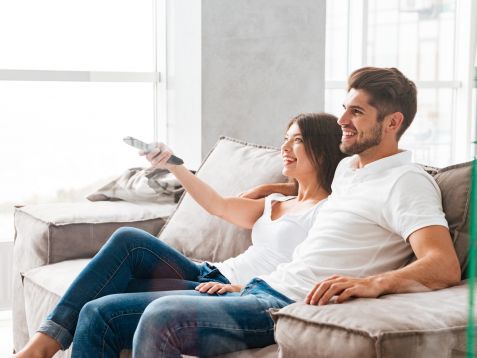 More than 90 per cent of Polish Internet users reach for their smartphones during commercial breaks while watching TV. One third of them browse social apps and every fifth user plays mobile games. What else do we know about the quality of ad contact when people use more than one screen simultaneously? Check out the unique results of the newest Gemius single-source study in Poland: gemiusAdReal.

Gemius studied the consumption of TV advertisements among the Internet users in April 2018. This analysis was possible through the use of the proprietary gemiusAdReal methodology allowing to measurement of ads displayed on PCs, laptops and also on smartphones and in TV. What can we learn from the first results of the Gemius’ newest single source study?

The daily pattern of PC, smartphone and TV usage reveals new interdependencies in media consumption. Smartphones accompanied Internet users from dawn to dusk; the intensity of smartphone usage gradually increased from early morning to peak between 8 and 9 p.m. A similar pattern of consumption was observed among PC and laptop users; however, it was almost two times less intensive. The daily schedule for watching TV was much more diverse (the study covered the four most popular TV channels on the market: Polsat, TVN, TVP1 and TVP2). Before 3 p.m., TV consumption was the lowest among the devices studied, only to rapidly increase after 4 p.m. 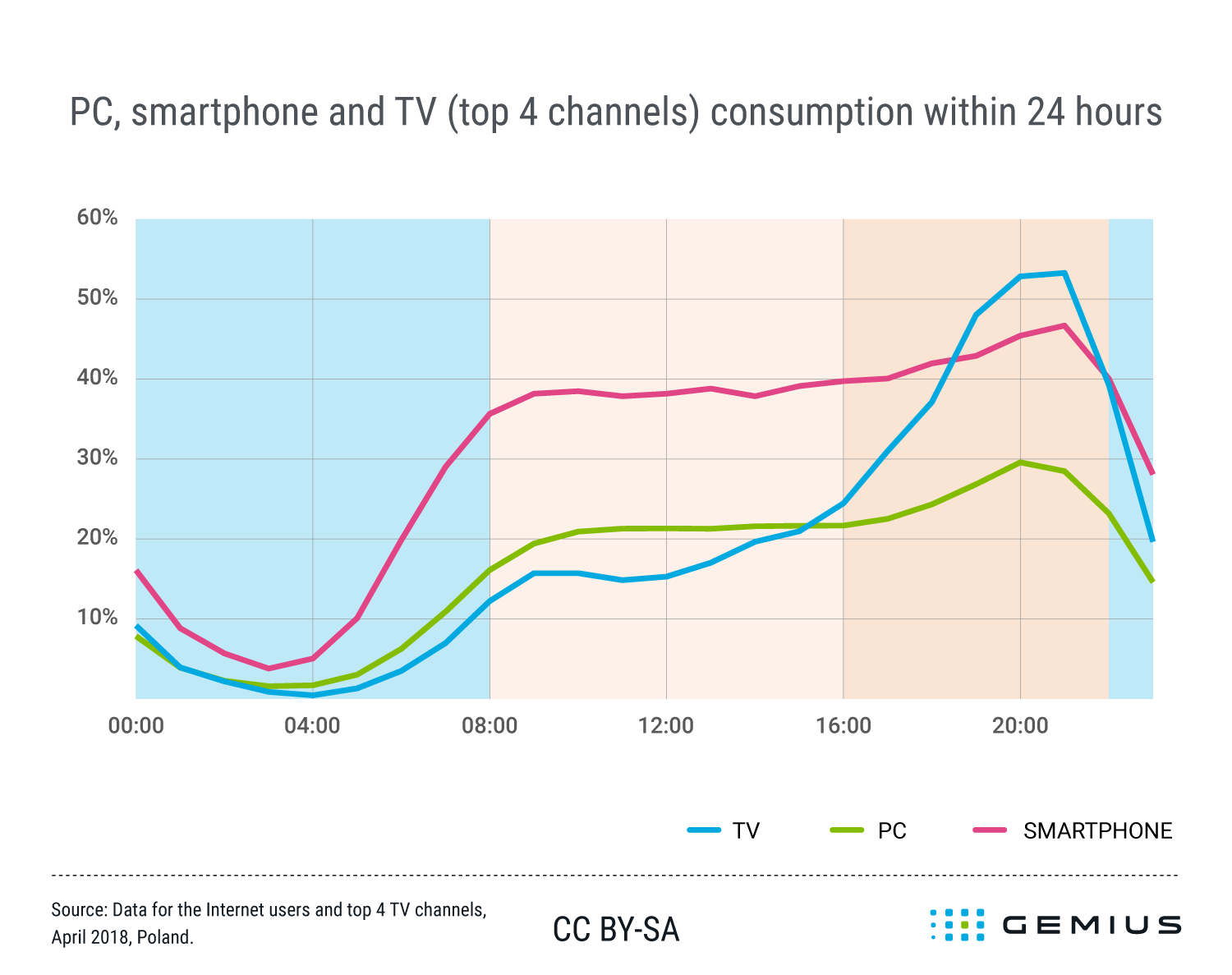 Combined consumption of smartphone and TV

In April 2018, the highest consumption of all three types of devices was observed after 8 p.m; for TV and for smartphone the usage peaked at the same time: at 9 p.m. Gemius studied how it affected advertising consumption. It appears that as many as 93 percent of the Internet users used the phone during TV commercial breaks at least once in a month. But What is more important, consumers were active on their mobiles during 28 per cent of all TV ads to which they were exposed.

‘What we are seeing is the simultaneous consumption of both media types, which means distracting the viewers’ attention and drawing their eyes away from the TV screen. We are talking about apps including social media, phone calls or gaming. However, instead of worrying about the ineffectiveness of communication, we should think of it as an opportunity: the data enables us to open new channels of communication with the consumer. Matching the content of an online smartphone campaign to that of a TV commercial break opens a new dimension in omnichannel optimisation’, said Marta Sułkiewicz, Chief Sales Officer at Gemius.

Commercial break is for smartphone

Gemius not only analysed the users’ multiscreening habits, but also checked what exactly they are doing on their smartphones during TV commercial breaks. It turns out that they most frequently browsed social apps, with 33 per cent of surveyed internet users engaging in this activity. More than one fifth (21 per cent) of consumers played games on their smartphones. Communication apps, including traditional phone calls, were used next (8 per cent) along with online shopping apps (6 per cent). 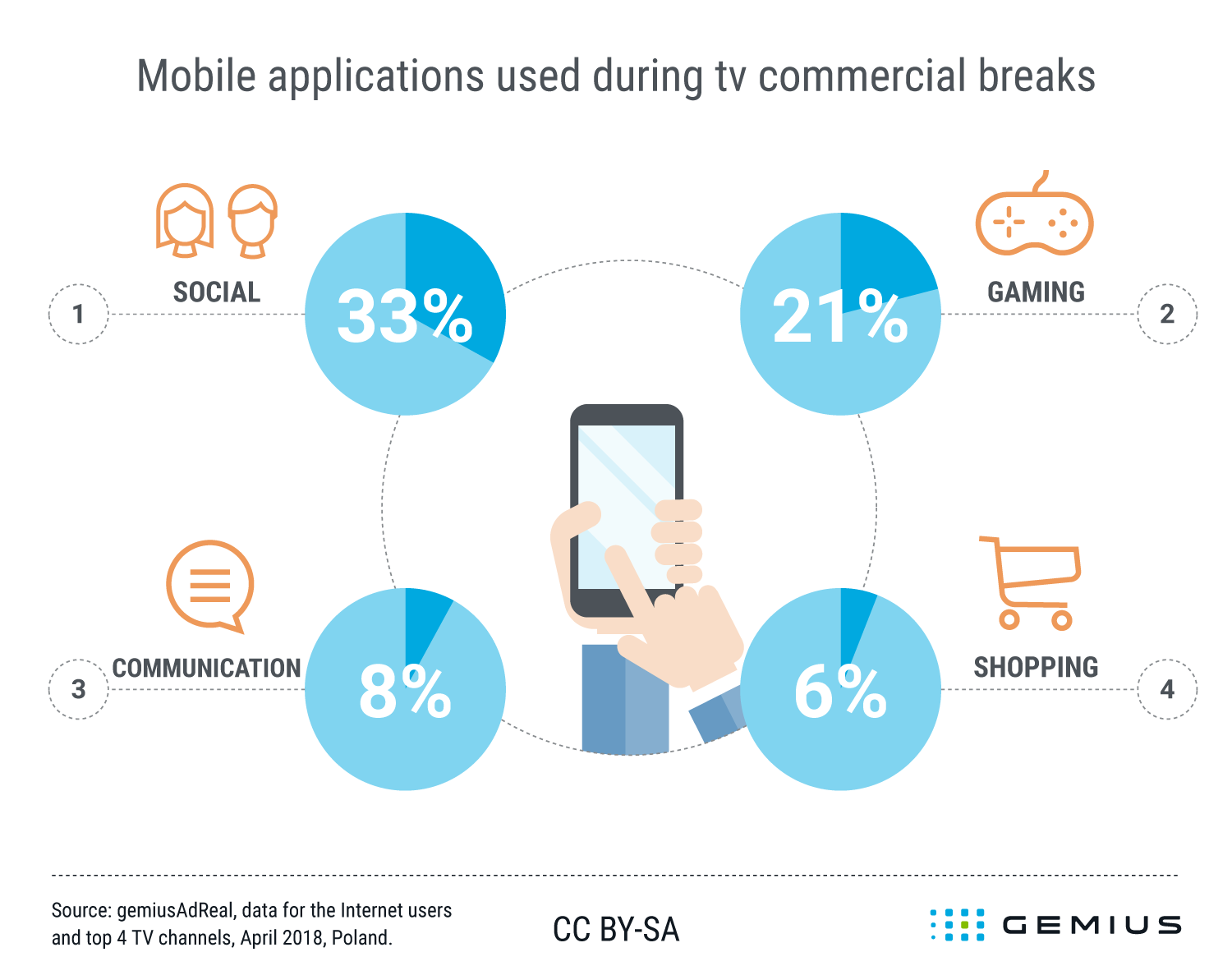 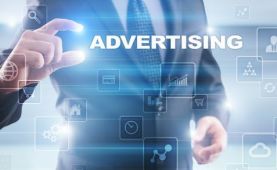