Industry
Gemius Global | About us | History

We’re a consulting company advising clients on how to use internet-generated knowledge in business decision making. Over the last 20 years we have been providing knowledge concerning online audience: unique socio-demographic profiles, ways they use the internet, as well as e-commerce, digital marketing, big data and internet technology information to around a thousand of clients from the EMEA region.

Our internet adventure started in 1999. What is our success story? 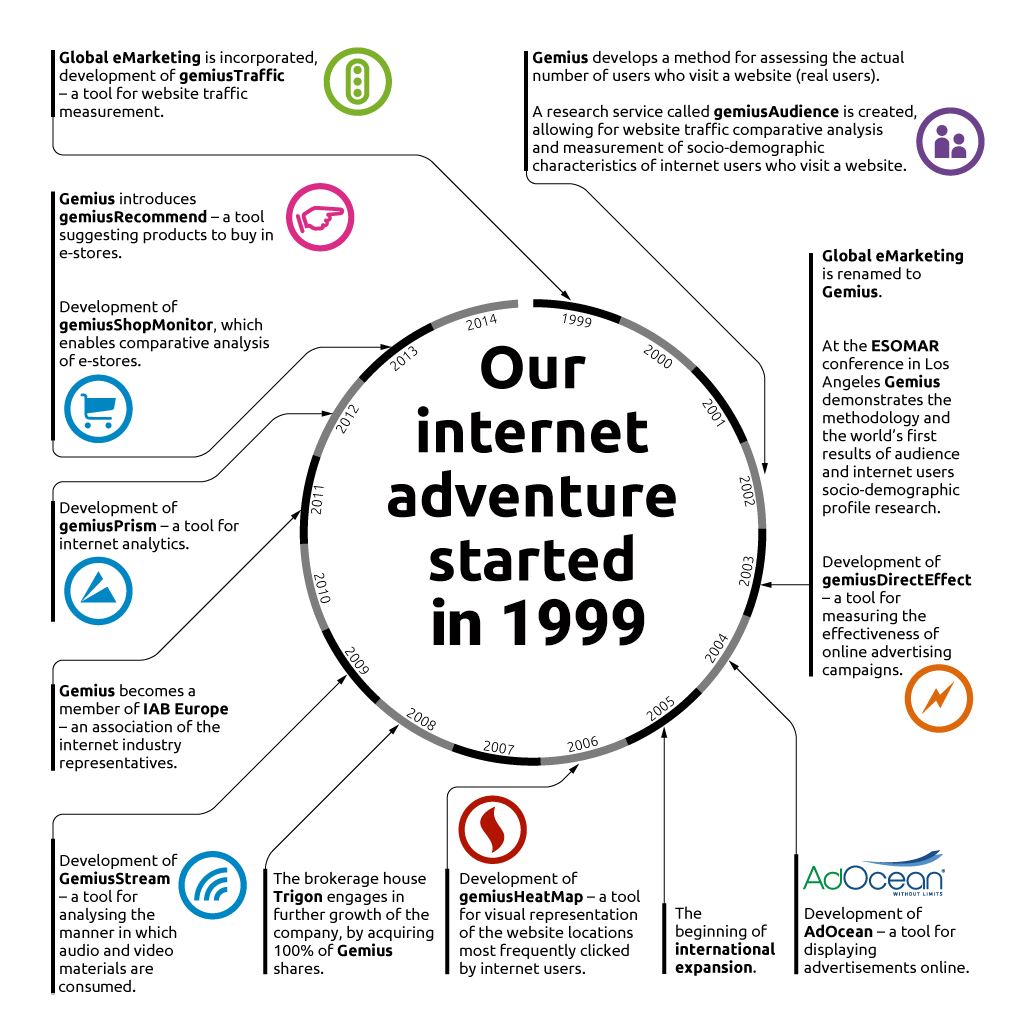 We first chose the name Global eMarketing. Our initial project was called GeMius, and was a system used to measure a number of different indicators on websites.

We spread our wings quickly, changed the company name to Gemius. In response to significant demand on our services, we extended our offer with two novel solutions. The first tool, gemiusDirectEffect, provides data on how effective an online campaign is. The other new product, gemiusAdHoc, is a consumer study tailored to individual requirements of our clients. The original system, GeMius, was renamed to gemiusTraffic.

Not long afterwards, we created an internet measurement method which allows us to assess the actual number of users who visit a website of interest (real users). The algorithm was a breakthrough in the history of the internet’s development as an advertising medium, as it factors in certain determinants that can potentially disrupt the results. For instance, it takes into account the possibility of a user deleting cookies, switching over to another browser or sharing the computer with other persons.

The method we conceived merges data coming from two types of research: user-centric and site-centric. The user-centric study aims to measure the socio-demographic characteristics (such as the sex, age, residence) of the internet users who visit websites of choice. Site-centric approach allows us to determine the frequency of entries to a website, the average duration of a visit or the number of page views, etc. By analysing the co-relations taking place between the two sets of data, we can assist our clients in taking up the right strategies.

The above-described method was presented in Los Angeles at the European Society for Opinion and Marketing Research (ESOMAR) conference. This was also when we demonstrated the world’s first results of internet users socio-demographic profile research. The post-conference article can be downloaded from the ESOMAR website. We called our research service ’Prawdziwy Profil’ (true profile) and launched it on the Polish market first.

The results obtained with Megapanel PBI/Gemius were first published in January 2005. The data we showed concerned the popularity of e-publishers and websites in October 2004. Since then the research results have been continuously published on a monthly basis.

Megapanel PBI/Gemius offers our clients the knowledge on which local or global websites are used by the online audience, the type of content sought online, the insight into who the users are and where they are most active.

Our research service was a trigger that sparked the growth of the Polish internet. Even today it is employed by advertisers, advertising agencies and media houses to assess the advertising potential of websites and to plan online marketing campaigns. E-publishers, based on the data we deliver, estimate their share in the online market pie and valuate the advertising space they manage.

Megapanel PBI/Gemius, known otherwise as gemiusAudience, is now conducted in over 30 other countries. In 9 of them we perform the research commissioned by the media industry organizations.

In 2004 we launched a tool for displaying ads online. We named it AdOcean. With this solution at hand, our clients are now able to manage their online advertising campaigns in a most effective way.

The international expansion started in 2005 from Estonia, Lithuania and Ukraine. Then, in 2006 we broadened our operations by entering the Latvian market. In the same year, our cooperation with the Hungarian branch of the research company Ipsos was remodelled to carry out projects in that country too. Shortly after that, we won a tender in Denmark, thus obtaining yet another foreign contract. This was also when we took the decision to include Croatia, Slovenia and Russia in our research. In 2008 the list of markets where we operate was extended with Bulgaria, the Czech Republic and Slovakia. One year later we also made our way to Belarus.

In 2006 we implemented an analytical tool called gemiusHeatMap, which illustrates these points on a website where internet users click most. Thanks to this solution, our clients can study the behaviour of visitors to a concrete website.

Two years later, the growth of our company was further boosted by the involvement of Trigon. The brokerage house acquired 100 per cent of Gemius shares.

The next objective we set ourselves was to carry on foreign expansion. In 2010 we commenced researching the internet in Bosnia and Herzegovina, just to move on to Israel and Turkey in 2011. In the ensuing year, our services covered Moldova and Serbia. Since 2012 we have operated on the Portuguese market as well.

The year 2009 saw the arrival of a new analytical tool. Known as gemiusStream, it is used to measure indicators related to online audio and video content. As a result of this development, our clients can learn about the manner in which the online audience enjoy multimedia.

Another tool, gemiusStream was introduced as a component of gemiusAudience in Denmark. Advertisers, media houses and publishers from that country receive data allowing them to compare audio and video materials by a number of indicators and to determine the socio-demographic profile of the users. In the same timeframe, similar knowledge became available for the Czech, Hungarian, Lithuanian, Macedonian, Polish and Turkish markets.

Around the same time we decided to tap into the expertise of our specialists by building consulting structures within our company.

In the recent years, we decided to focus on online retail. So, in 2013, we created an analytical tool called gemiusShopMonitor. Thanks to this solution, clients can compare the performance of their e-store with the results obtained by competition. They can also contrast their website’s results with data for the entire industry, which means knowledge on one’s current market position and a chance to adjust business operations.

In the same year, in foreign markets, we extended our offer with gemiusRecommend. The tool is used to suggest concrete products to e-shops customers.

The year 2013 saw our debut in the Middle East and North Africa (the MENA region). We also launched our operations on the Macedonian, Romanian and Kazakh markets at that time.

We are continuously honing our competence in mobile internet as well. The country that was first to receive access to knowledge on tablet and smartphone users was Hungary.

For us, international success is just a regular thing. In 2014 we won a tender in Belgium and Luxemburg. We also noted one more victory in the Czech Republic.

On the 20th of May in a contest organised by IAB Europe, Gemius was awarded first prize in the category of internet audience research. Its winning project enables publishers to determine their total range across all devices (Behavioral Panel Synthesis, BPS).

Currently, Gemius continues to press ahead and is, among others, preparing to revolutionise the Polish market. In July, customers in Poland received daily information on website audiences. Gemius has also established cooperation with leading research companies, ie. Nielsen and Millward Brown. In a joint effort, they aim to combine the analyses of the internet, TV, radio, and press to establish a single base of multimedia data.

In March 2016, Gemius launched a new tool on the Polish market gemiusAdReal. It is created to monitor and in-depth analyze PC campaigns and strategies of all advertisers on the market.

May of 2016 was a great time for Gemius. We have established cooperation with PBI (Polskie Badanie Internetu eng. Polish Internet Research). Besides, we have been awarded first prize in the IAB Europe Research Awards in the category of Audience Measurement for our Overnight™. IAB described it as: "Revolution in Delivering Final and Complete Internet Audience Results."

2017 brought as another prize in the IAB Europe Research Awards. Again, in the Audience Measurement category. The product that was awarded was gemiusAdReal. IAB stated that our tool is a "Breakthrough Transparency in the Online Advertising Industry (inc. video, display, programmatic, search, social & viewability)."

In 2019 Gemius Single Source for gemiusPostBuy and gemiusAdReal was recognized and granted first prize in IAB Europe Research Awards in the category of Audience Measurement.

In March 2019, gemiusAdReal became independent single-source fueled research covering all brands’ advertising activity on TV, PC and Mobile (top applications: Facebook, YouTube, Instagram). The study allows for monitoring and in-depth analysis of third-party cross-media campaigns and strategies of all advertisers on the market. It is based on a panel, i.e. a representative group of Internet users – including smartphone users.
Since May 2019, Gemius has a new CEO, Marcin Pery has replaced Piotr Ejdys.