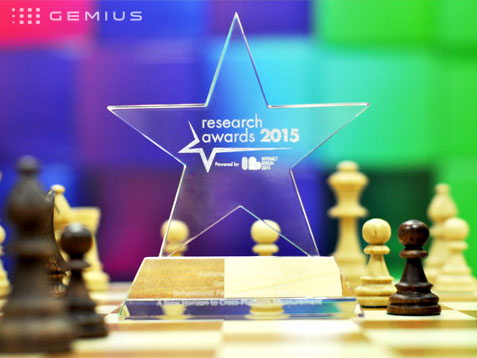 In a contest organised by IAB Europe, Gemius was awarded first prize in the category of internet audience research.Its winning project enables publishers to determine their total range across all devices (Behavioral Panel Synthesis, BPS).

The awards were presented at the Interact conference, which was held in Berlin on the 20th of May. In the final round Gemius competed with three other companies. The jury consisted of internet research experts: Nick Niddleston (ZenithOptimedia), Paul Hardcastle (Yahoo!), Ariane Längsfeld (Millward Brown), Paweł Kolenda (IAB Polska) and Tuncay Yavuz (IAB Turcja, OMD Turcja).

‘It is a great honour for Gemius – especially because in a way, this prestigious award has been given away by the entire European internet industry’ – says Attila Weisz, business development director in charge of audience research study at Gemius. ‘Audience measurement is at the root of our business, and it requires a lot of investment, flexibility, plus a continuous tracking of trends. The IAB Europe Research Award will definitely motivate us in continuing pushing forward. It will also foster the development of additional new products that are already being prepared in our ‘kitchen’, as well’ – adds Attila Weisz.

What is BPS about?

Emil Pawłowski, methodology director at Gemius explains: “Gemius measures the activity of a representative sample of internet users who have agreed to participate in the study and have also filled out a special survey. The Behavioral Panel Synthesis (BPS) model combines all the users of various devices in order to measure the overall range of the websites under analysis. A calibration panel is used to determine which users of the various devices should be combined together. The activity of this group of users is measured by Gemius on all of their devices. Based on their socio-demographic profiles and their activity on the internet, it is possible to develop a model founded on modern methods of artificial intelligence, and forecasts that help predict which users should be combined with each other”.

Piotr Ejdys, president of Gemius, underlines that the IAB Europe Research Award is further proof of how rapidly the company is developing its offer and increasing the range of its influence. ‘In May 2014, we expanded the scope of our activities to include the analysis of internet traffic on individual devices (referred to as „multiplatform analysis”). This solution has already been implemented in 10 countries, including Denmark, Belgium and Turkey. In April this year, we introduced a new quality to the field of internet research – a method of behavioral synthesis that was awarded by IAB Europe,’ says Ejdys.

Last year, Gemius won the tender to conduct a study of the internet in Belgium and Luxemburg. The company was also, once again, chosen to be the official supplier of internet traffic data in the Czech Republic. And despite losing this year’s tender in Denmark, Gemius continues to press ahead and is, among others, preparing to revolutionise the Polish market. From July, customers in Poland will receive daily information on website audiences. Gemius has also established cooperation with leading research companies, ie. Nielsen and Millward Brown. In a joint effort, they aim to combine the analyses of internet, TV, radio and press to establish a single base of multimedia data.