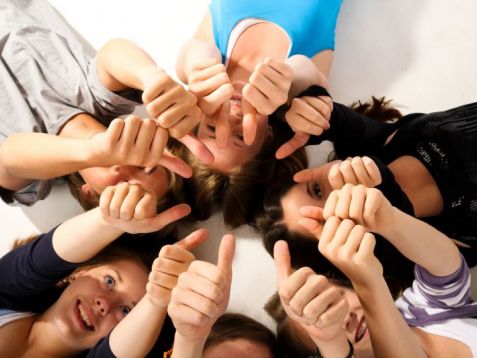 Over 85 per cent of internet users from Hungary and Turkey visit the Facebook website. In Belarus, it’ s only 19 per cent. In Poland, the network is particularly popular among the young, whereas in Denmark almost half of internet users using the social site are older than 46 – a Gemius analysis shows.

Gemius conducts internet research in over 30 countries in Europe, North Africa and Middle East. In 11 of those, i.e. Saudi Arabia, Belarus, Denmark, Egypt, Jordan, Poland, Turkey, Ukraine, Hungary, Russia and the UAE – the company also measures the popularity of Facebook among the local audiences.

"It is estimated that as much as 48 per cent of active Facebook users log in daily, be it week days or holidays. For over 40 per cent, checking out the latest Facebook activity is the very first thing to do in the morning - says Lauris Lietavietis".

The largest share of internet users visiting Facebook.com is noted in Hungary and Turkey: nearly 9 out of 10 (86 per cent); closely followed by Egypt, with 82 per cent. The smallest percentage of internet users – in countries where Gemius measures Facebook popularity – logs on in Belarus (19 per cent), Ukraine (28 per cent) and Russia (30 per cent).

"It is estimated that as much as 48 per cent of active Facebook users log in daily, be it week days or holidays. For over 40 per cent, checking out the latest Facebook activity is the very first thing to do in the morning" says Lauris Lietavietis, Gemius online market expert. "Surely, the deep integration of the portal with mobile phones fuels the trend. Around 680 million users, which is almost a half, logs in via mobile devices" add expert. 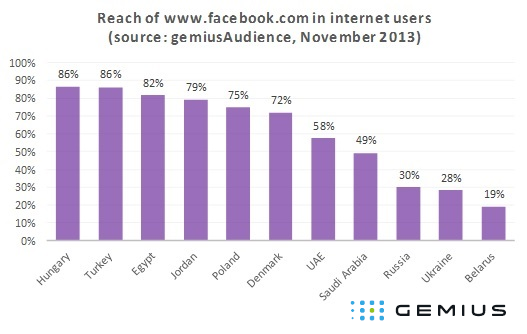 In Denmark, the www.facebook.com address is visited by 72 per cent of internet users in a month. The greatest popularity is noted in persons aged 46 and more, who constitute nearly half (44 per cent) of the social network’s population. The second strongest group are users aged between 15 and 25 (over 21 per cent).

It turns out that in Poland, Facebook enjoys a similar level of popularity. It is used by 75 per cent of the country’s internet population. It is most popular among the youth – users between 19 and 25 years old. The popular social network is used by over 80 per cent of them. Further down the list come individuals aged 26-35 (76 per cent) and 7-18 (75 per cent).

In Belarus, on the other hand, the address Facebook.com is not highly esteemed. It is visited by 19 per cent of internet users a month. Yet the age group distribution in Belarus is similar to the one in Poland rather than in Denmark. As much as 40 per cent of users are 26-35 years old. Individuals aged between 15 and 25 constitute 35 per cent. 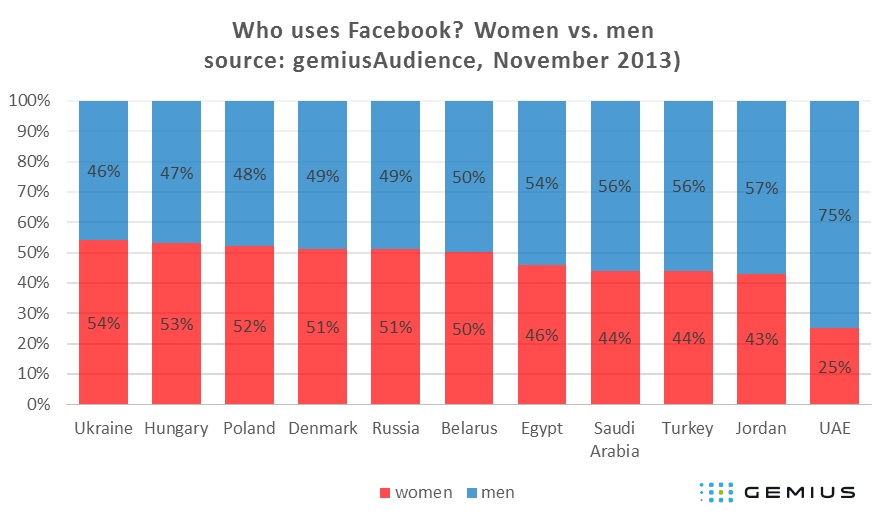 Facebook was born on 4 February 2004 at Harvard University in Cambridge. This was exactly 10 years ago. Since then the portal has gone a long way. It developed from a service aimed at students of American universities and high schools to a social portal of global reach, comprising over 1.3 bn users. In 2013 the network operated in over 70 languages, and as much as 75 per cent of users were outside the USA.

The data quoted originates from an international internet study measurement (gemiusAudience) conducted by Gemius in more than 30 countries. It aims to research into the number and demographic profile of internet users and the manner in which they utilize the web. The study is performed according to Gemius proprietary hybrid methodology and in accordance with the ICC/ESOMAR international code of conduct.