What mobile devices did the Poles use to connect to the Internet in 2016? 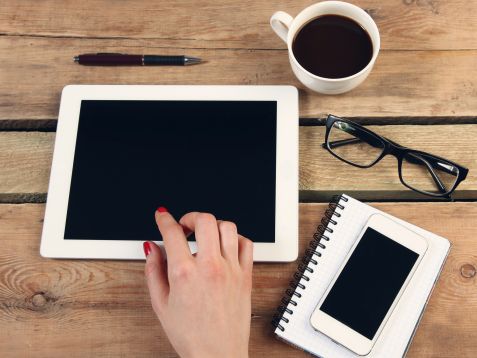 Last year, the mobile devices which were most frequently used to visit Polish websites were Samsung phones and tablets. More than one-third of page views were made using Samsung equipment – as confirmed by the analyses performed by Gemius. However, the largest increase, by almost two and a half times, in the number of page views was recorded for Huawei devices, which in a short time caught up with brands such as LG and Sony.

Samsung took the dominant position in the ranking of mobile device brands chosen by internet users in Poland to connect to Polish websites. Throughout the entire 2016, over a third of all mobile page views were performed on Samsung devices – this percentage ranged from 36 per cent in April and May to 38.4 per cent in August (source: gemiusPrism). The second, stable position was taken by Apple – by oscillating around 20 per cent it posed no threat to Samsung, but it maintained a clear lead over the other contenders. Despite a significant drop in the percentage of page views (from 22.2 per cent in May to 18.3 per cent in June), the users of Apple devices recouped their losses in the second half of the year. Consequently, the percentage of page views on Apple devices increased to 20.7 per cent in December.

Will LG fend off the threat posed by Huawei?

The third spot in the ranking was taken by LG mobile devices. In January and February, their users were responsible for over 11.5 per cent of page views. The subsequent months saw a continued decline, leading to mere 9.5 per cent in December. This result gave LG the third spot in the ranking; however, if this trend is maintained, we can expect the top spots to look different in 2017. This may happen as a result of the strengthening of Huawei's position, whose share in the number of total page views between January and December grew by over 5.1 percentage points. During that time, Huawei overtook the results of HTC, Sony and Nokia, and finished the year with a share in the total number of page views amounting to 8.7 per cent. 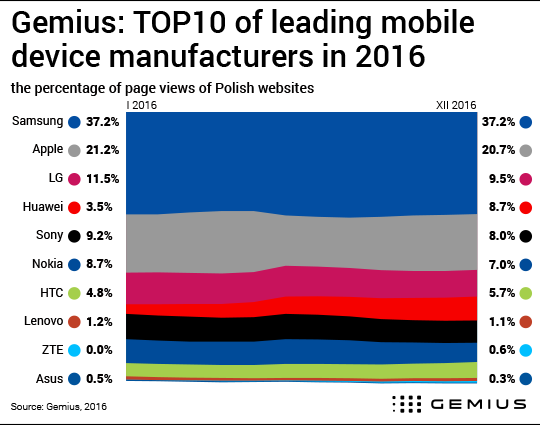 Three brands up, six down, one stays the same