Video sells on the Internet 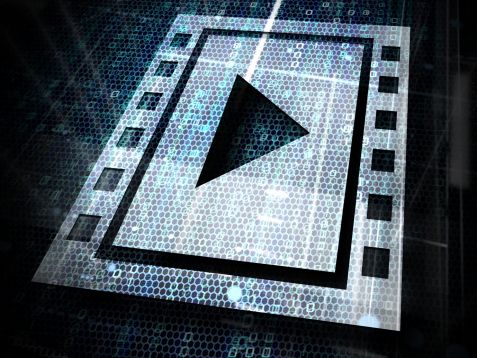 In November, advertising spots were emitted most frequently by Facebook and YouTube, with the greatest reach being recorded for material promoting movies, food and shops (both classic and online). Find out which sectors and brands promoted themselves most forcefully through online video on the Polish web.

The greatest effectiveness in reaching web users with advertising videos belongs to the movie, multimedia, books and CD sector. Such video clips reached almost 16.2 million real users, representing 59.7 per cent of all internet users (source: gemiusAdReal). Over half of those users encountered video spots from Netflix – a result of 53.2 per cent, placing them in a clear lead ahead of another film distributor, United International Pictures, with 30.1 per cent. Between the remaining advertisers the differences in share of emissions was not so great: Warner Bros. Entertainment – 26.8 per cent, TVN – 23.5 per cent, and Player.pl – 21.8 per cent. The publisher most frequently emitting video adverts for this sector was Facebook, where they were watched by 54.9 per cent of the 16.2 million real users reached by spots from the movie, multimedia, book and CD/DVD sector.

“The category of products related to media, books, CDs and DVD owes its lead primarily to the offensive by Netflix, who for several months has been operating very intensively online,” explains Marta Sułkiewicz, an expert in online video advertising at Gemius. “The Netflix campaign, which can be seen not only on the Polish market, is just the beginning of a great battle in the SVOD (subscription video on demand) sector. For film distributors November is also premiere season – in the last month we have witnessed promotional spots for productions such as “Allied” and “Arrival”. The choice of online video as the ideal means to reach internet users should come as no surprise to anyone in the case of this group of advertisers,” adds Sułkiewicz. 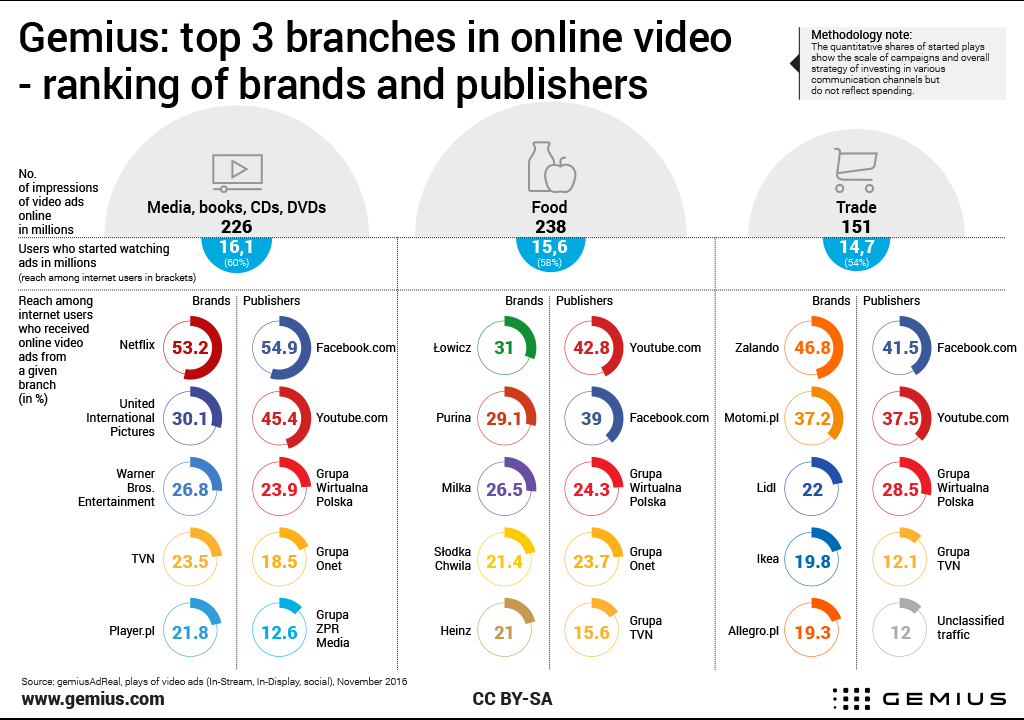 Food advertisers chose to put their video spots on YouTube, which reached 42.8 per cent of the 15.6 million real users who watched material promoting food. Facebook came in second with 39 per cent. The subsequent places in the rankings of websites showing these adverts were occupied by the Wirtualna Polska and Onet groups with results of more or less 24 per cent, and the TVN group, with 15.6 per cent. The most frequent emissions were of material by Łowicz, which were viewed by almost 31 per cent of internet users who watched food adverts. Second place went to snacks ... for pets. Purina video spots reached 29.1 per cent of people who watched food advertising campaigns on the ‘net.

“The food industry’s second place is not so much a result of seasonal factors as a chance occurrence – several manufacturers this month launched new product lines, such as Łowicz’s immunity-boosting jams. But we must admit that the season for chocolate Santas and advent calendars had quite a lot to say,” explains the Gemius expert.

Advertisers in the commercial sector managed to reach 14.7 million real users, representing 54.1 per cent of all internet users. The largest proportion of those came across the advertising material on Facebook (41.5 per cent) and YouTube (37.5 per cent). Polish internet users most frequently saw video spots for Zalando, with an audience comprising 46.8 per cent of all the internet users who watched advertisements by the commercial sector. The second most active video advertiser was Motomi.pl, with 37.2 per cent. The remaining trio of retail companies promoting themselves through online material all obtained similar results, from nearly 22 per cent (Lidl), through 20 per cent (Ikea), to 19.3 per cent (Allegro.pl).

“The list of most active online video advertisers in the commercial sector is headed by electronics retail brands. What is interesting is that video spots had previously been the domain of traditional shops, while online shops focussed primarily on performance display. For some time we have been seeing e-shops investing in online video branding campaigns – Zalando is again appearing on television and in online video before Christmas, while Motomi.pl is trying to enter the mass conscience to become a viable competitor to OTOMOTO,” adds Sułkiewicz.

The Gemius expert also points out that all three sectors – media, food and trade – are very active in online video throughout the year. Advertisers in the food and trade sectors mainly use television to build their reach, and online video to boost it, while film distributors have recently been concentrating more on the internet.