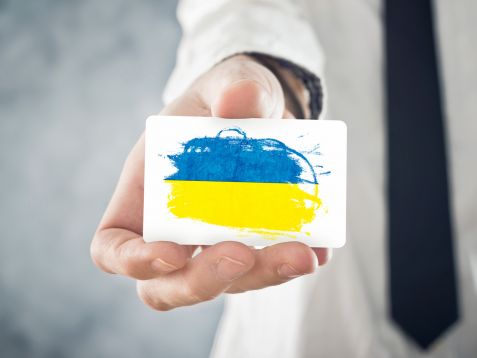 Which 10 advertising spots had the greatest Ukrainian online audience last month? A Gemius study shows that the Top 10 featured sweet and cosmetics adverts most heavily. The leader, however, was an advert for the Kyivstar network, watched by 4.3 million web users.

Among the 10 online video advertisements which reached the greatest number of web users in February, half of the spots were related to the food and drinks industry, and one third were for cosmetics and personal hygiene products, a Gemius study reveals (source: gemiusAdReal). The study takes into account February data collected for internet users aged 14 to 69 on desktop and laptop computers. 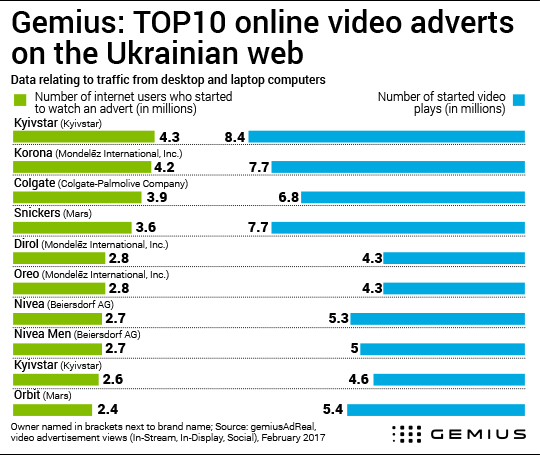 Sweet adverts were well represented in the Top 10, but first place by number of internet users went to a creation by the mobile network Kyivstar. Its advert found an audience of 4.3 million internet users. Of the studied videos, this was also the record holder in terms of number of views, appearing 8.4 million times. It is worth noting that it is not the only video advert for Kyivstar in the ranking. The second spot for the telecoms company (in ninth place on the list) was watched by 2.6 million internet users.

─ The data shows that over the last half year such advertisers as Kyivstar, Mondelez and Beiersdorf have been very active in terms of video ─ they featured in the TOP10 ranking by real users almost every month. February is no exception. Kyivstar has two video ads in the ranking, and occupies a lead position, having with one of them alone reached more than 4 million users, while the total of video materials from the telecommunications brand reached almost 6 million real users in February. The situation is different with Mondelez, with three video ads in the ranking; by total numbers this advertiser attained the highest reach of real users in February ─ 6.5 million, with more than 25 million plays within a month ─ says Lesya Prus, regional manager at Gemius.

Gum, biscuits and chocolate by Mondelēz

Highest of the food and drinks adverts, with second place in the Top 10, was an advert for Korona chocolates (Mondelēz International). It met with an audience of 4.2 million internet users. The list also featured two other videos from the Mondelēz portfolio: Dirol chewing gum (over 2.8 million viewers) and Oreo cookies (almost 2.8 million). Third place in the ranking went to a video promoting the Colgate brand (Colgate-Palmolive Company). It was watched by an audience of 3.9 million internet users. This is one of three advertisements for cosmetics and personal hygiene products in the Top 10. Apart from the Colgate toothpaste adverts there were also creations for the Nivea and Nivea Men brands (Beiersdorf AG).