The Internet and news websites after the Russian aggression against Ukraine

Due to the situation in Ukraine, we publish the latest information about platforms where reliable information was most often searched for in Ukraine during February 21-27, as well as activities related to media market entities.

On February 21-27, 26 095 320 Real Users searched for information in the ukrainian media and portals. The ATS was 4h 48m 35s. Ukrainians most often used smartphones and computers. With each day of the past week, a growing reach building is noticeable – as shows results from Mediapanel research.

The Internet after the Russian aggression against Ukraine

In the case of data analysis for a specific type of media, news media and portals were also the most searched, dominating television and radio. Therefore, it can be argued that the most frequently sought information was specific, quickly and easily available information.

Activities of the media market - Google disables location in Ukraine

Google Alphabet Inc has temporarily disabled some Google Maps tools in Ukraine that provide live information about road conditions and locations of places. The company safety after consulting with Ukrainian authorities announced that these steps were taken to protect the country's local community, including regional and local authorities.

The media calls for the use of reliable sources

The Meta concern is fighting against Russian disinformation. The owner of platforms such as Facebook, Instagram, Messenger and WhatsApp not only blocked profiles belonging to Russian state media on its websites; it also expanded the activities related to fact-checking, and created new, additional privacy options for Ukrainian citizens using the application. Meta also introduced markings for Russian media profiles and limited them in the area of ​​advertising.

Media in Poland make Ukrainian channels available to their recipients

TV stations, portals and radio stations operating in Poland joined the fight against Russian disinformation. Telewizja Polska, in cooperation with the Ukrainian public broadcaster UA: PBC, added Ukrainian public television, UA1, to its channels. Viewers can watch the station using the TVP GO application (mobile and HbbTV applications), TVP VOD (Smart TV and mobile applications) or TVP Stream. The signal of Ukrainian radio is also available by the Polish Radio. Soon it will also be possible to listen to the radio using the Polish broadcaster's application.

The Ukraina24 news channel is broadcasting live by Onet and Interia, as well as by Polsat Box. Ukraina24 is one of the largest Ukrainian news channels. It broadcasts continuously, despite the ongoing Russian invasion of Ukraine. Both Onet and TVN24 have launched sections on their websites devoted to the latest information from Ukraine - in the native language of the citizens of this country. 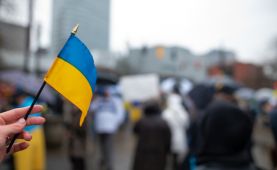