The Czech Republic: using tablets to surf the Internet 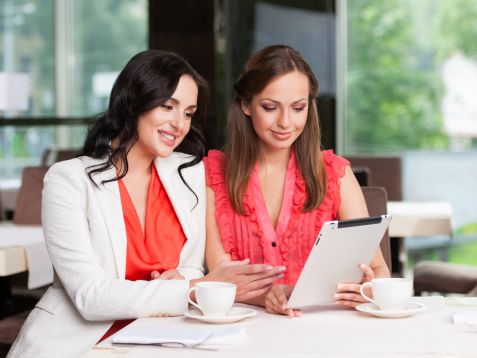 Czech tablet users show the most interest in general informational websites, web directories and news sites. What else do Czechs search for when browsing the Internet on their tablets? Gemius’ latest analysis provides the answers.

In search of information

The analysis of mobile internet pages conducted by Gemius shows that, in May, Czechs usually connected to the Internet via tablets in order to use general informational websites. These websites contain information from various fields, and users can benefit from functionalities such as e-mail, chat, weather forecasts and horoscopes. These websites are in the lead in terms of both the monthly number of users (over 926,000) and the number of page views (over 45.5 million). Website directories and news sites also attracted a lot of interest. However, while these two categories had a high number of users (846,000 and 783,000, respectively), they ranked lower in terms of number of views (12.8 million and 24.9 million views, respectively). 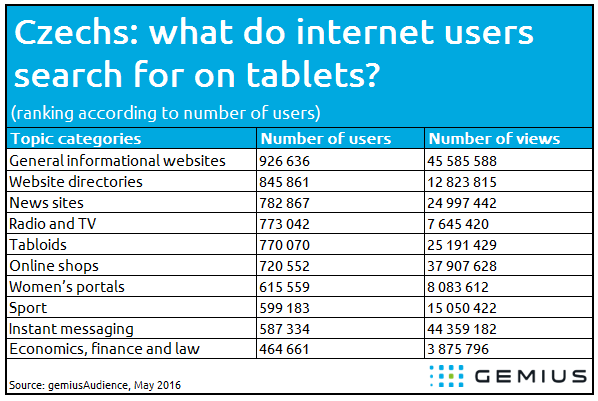 The fourth and fifth most popular website categories visited via tablet are radio and TV, and tabloids, which were viewed by nearly 770,000 users on average. Despite attracting a similar number of internet users, tabloid websites had a much higher number of views than radio and TV websites (25 million and 7.6 million, respectively).

In May, Czechs also used their tablets to browse online shops (720,000 users), women’s portals (615,000 users) and sports websites (599,000 users). However, the results differ when it comes to number of views. Online shops, which had the lowest number of users, recorded a high number of monthly views (37.9 million). Sports websites are almost twice as popular as women’s portals in terms of views (15 million and 8 million views, respectively). Websites related to economics, finance and law came in tenth on both scales, with 464,000 users and 3.8 million views.

Czechs were also found to make frequent use of instant messaging via their tablets. According to Gemius data, an average of 587,000 users visited websites offering this function in May (44 million views).