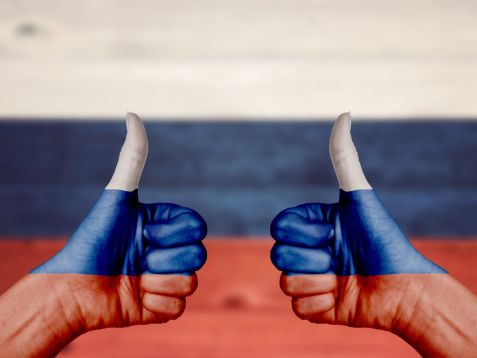 Where do the Russian users like to go on the internet?

In Russia, the absolute ruler the search engine Yandex, used by eight out of ten runet audience members (57.1 m). A similar number of internet users pay visits to another Russian search engine, Mail.ru (56.3 m). Last year, both these websites were used by 80 per cent of runet population (52.1 m and 50.1 m, respectively). However, the American rival is gaining ground and enjoys a growing popularity. As recently as June 2013 the Google search engine was used by only five in ten Russians (34.5 m), but this number has grown to nearly seven out of ten online individuals (46.5 m) at present.

"Over several last years, Russian internet users have opted for their local portals and web services, in appreciation of their high technological standard and content perfectly adapted to the interests and needs of the online population in Russia - comments Jadwiga Rogoża“.

This phenomenon is explained by Jadwiga Rogoża, an analyst at the Centre for Eastern Studies (OSW), who specializes in Russian politics: “Over several last years, Russian internet users have opted for their local portals and web services, in appreciation of their high technological standard and content perfectly adapted to the interests and needs of the online population in Russia,“ she comments.

“Yet the pressure of authorities the Russian internet experiences is exerted also on the most popular portals. The neutral VKontakte was taken over by entities loyal to the government, and its creator, Pavel Durov was dismissed from his post of general director. Moreover, a modification to the search engine Yandex algorithms was enforced, and its maker and head Arkady Volozh handed in his resignation. The increasingly politicized net may motivate some of the ”enlightened” internet users to choose websites that are free of censorship,” Jadwiga Rogoża points out. 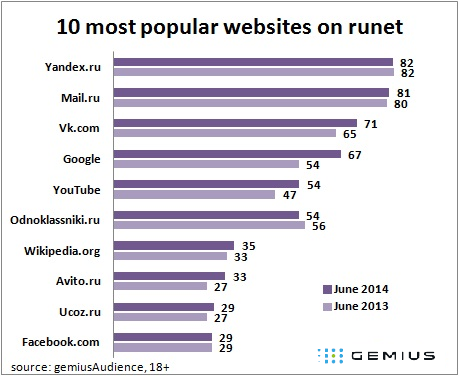 A quite opposite situation is seen when comparing the number of persons visiting the researched social networking sites. While the American Facebook may already boast a stable group of loyal users (20 m), the interest in its Russian counterpart VKontakte is on the rise too. Seven out of ten Russian internet users visit the site (49.7 m).

“Its considerable popularity could stem from the fact that the portal didn’t comply with intellectual property regulations and enabled practically unrestricted exchange of music and video files,” says Jadwiga Rogoża.

Apart from VKontakte, some significant interest has also been recorded Odnoklassniki. It is used by nearly half of Russians who connect the web (37.8 m).

YouTube is broadly used by internet users who look for audio-video content. It enjoys a growing popularity also among the Russian online audience. Almost half of them (37.9 m) now visit the website.

Another top runet websites are: Wikipedia.org (24.7 m), the auction portal Avito.ru (22.8 m) and the free hosting platform Ucoz.ru (20.4 m). Each of the above sites draws the attention of one in every three Russian internet users.