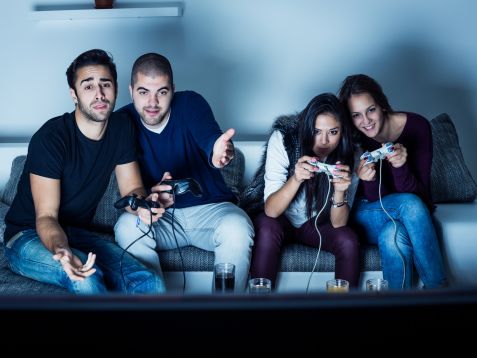 One in three PC internet users in Romania uses online gaming services. Gemius has looked into which of these enjoys the greatest popularity, who online gamers are, where they are from and which websites they visit most frequently.

A study of online gaming service users in Romania shows that they number close to 2.6 million, which is 36 per cent of all internet users in the country (source: gemiusAudience, August 2016). The statistically typical player is an urban male, aged 19–24.

The greatest interest in this form of entertainment is among the 19–24 and 35–39 age groups, with 15.6 and 15.1 per cent, respectively. Those least likely to visit online gaming sites are those in the 50–54 age group (4.7 per cent), while the oldest age group (55+) has nearly double that number of users (7.7 per cent). What is surprising, however, is that the decided majority is not comprised of the youngest web users (14–18). This group was only fifth, by their numbers (11.6 per cent of online gamers). 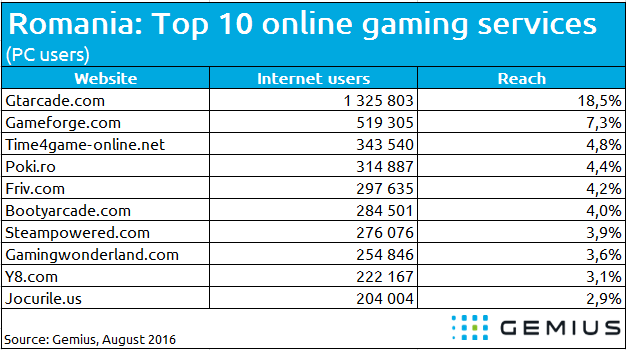 The unquestionable leader among Romanian online gaming services is Gtarcade.com, which, in August, was visited by 18.5 per cent of Romanian internet users. Second in the rankings, Gameforge.com, enjoyed less than half that interest (7.3 per cent). The subsequent places were occupied by Time4game-online.net (4.8 per cent), Poki.ro (4.4 per cent), Friv.com (4.2 per cent), Bootyarcade.com (4 per cent), Steampowered.com (3.9 per cent) Gamingwonderland.com (3.6 per cent), Y8.com (3.1 per cent) and Jocurile.us (2.8 per cent).