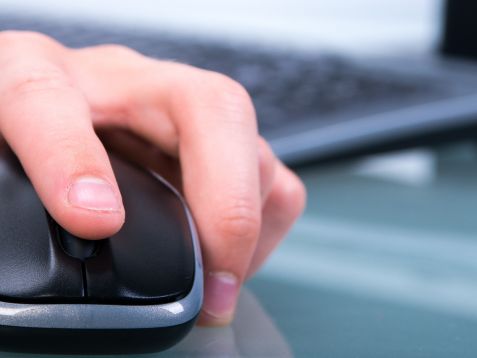 In Belarus and Ukraine, nearly nine out of ten internet users visit Russian websites. They enjoy five times less interest in Turkey, yet in that country, as it is also the case in Romania and Poland, the popularity of Russian websites is on a constant rise.

Many internet users from outside Russia express their interest in websites from that country. Where are the biggest numbers of users found? Gemius analysts have decided to check that by reviewing monthly results of a research project conducted regularly in over 30 countries. The data used concern the period between August 2013 and July 2014.

Russian websites record many users from Belarus and Ukraine

It turned out that Russian websites are visited monthly by an average of nine in ten internet users (86 per cent) in Belarus and Ukraine. This is the highest result among all the analysed countries, with little annual fluctuation (several percentage points).

Data from July 2014 shows that the online population of Belarus and Ukraine most often visit the social network Vk.com (58 per cent and 64 per cent of internet users, respectively) and the website Mail.ru, featuring such services as a search engine (54 per cent and 55 per cent). The third most popular Russian website in Belarus is the social network called Odnoklassniki.ru (28 per cent), while in Ukraine is it the hosting portal Ucoz.ru (25 per cent). 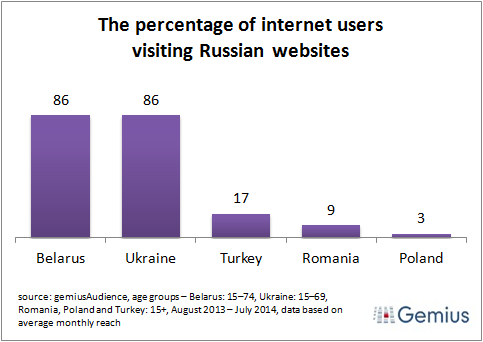 The Turkish monthly average for visits to Russian websites is every sixth user (17 per cent). From August 2013 to April 2014 the local interest in these web services doubled (from 11 per cent to 23 per cent). According to the data for July 2014, the most popular Russian website in Turkey is Mail.ru (14 per cent).

The July 2014 data show that in Romania the most popular of the Russian websites is Mail.ru (8 per cent). Four Times less users opt for the search engine Yandex.ru and the website Vk.com (3 per cent).

In Poland, on the other hand, Russian websites enjoy little popularity. Every month, it’s an average of 3 per cent of online population. But even there, some increase in Russian website visits has been noted. In June 2014, the Russian part of the internet was entered by 5 per cent of the internet users, while as soon as August 2013, the result was less than half of the current one (2 per cent).

The analysis of data from July 2014 shows that the largest share of the online population go to Yandex.ru (3 per cent). One-third of that popularity was noted for VK.com (1 per cent). The portal Rutube.ru, a counterpart of YouTube, is viewed by less than half per cent of the users.