Polish e-consumer under the microscope 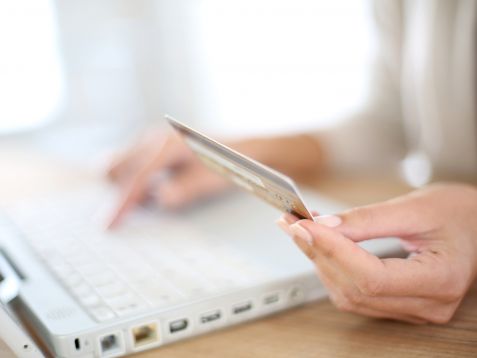 With the increasing popularity of e-commerce, the profile of online shoppers has been changing. Fifty-four percent of Polish internet users are already e-consumers. Their latest characteristic is presented in a report entitled “E-commerce in Poland 2017. Gemius for e-Commerce Poland”.

In 2017, online shoppers are primarily people under the age of 50 (88 percent), with a secondary or university degree (77 percent), living in larger cities (74 percent). They assess their financial status as a good one (51 percent). Women are found to be slightly bigger fans of e-commerce (53 percent).

The newest report shows that, compared to 2016, the share of online shoppers at the age of 25-34 has increased (currently, this number amounts to 29 percent of shoppers, as compared to 26 percent in 2016) and residents of smaller towns (44 percent as compared to 40 percent in the previous year). The share of people with a university degree got down in favour of the group of people with secondary degree and lower degrees. Currently, every third Polish e-consumer declares to have completed university education (30 percent as compared to 35 percent in 2016). Online shoppers hold an increasingly better view of their financial situation: the share of people declaring that their situation is good has been increasing for at least the last two years, and it currently amounts to 51 percent (in 2016, this number was 46 percent). 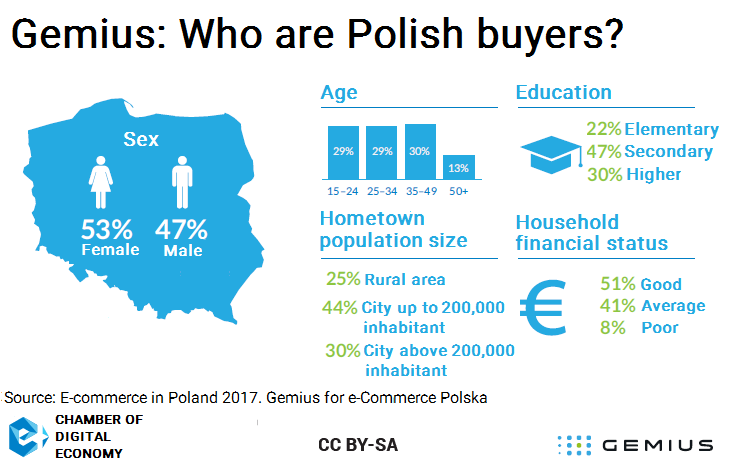 – This year’s report results are not surprising – for young people, the online market is a natural environment. This is how they communicate with others and shop. Young people also like to have a choice from numerous delivery methods and they pay specific attention to the speed and timeliness of the offered logistics services as well as the technological advancement”, says Katarzyna Binert, Gemius Expert. “The report shows that more and more shoppers assess their financial situation as a good one, which also is not a surprise, since the current unemployment rate is the lowest in 25 years – she adds.

– The number of shoppers who make their purchases in international e-shops will most likely continue to increase. Users look for products sold with more competitive prices or products that are unavailable in Poland. The EU legislation's application providing for a ban of geo-blocking may have an impact on the above increase as well as unification of prices for international shipping – says the Gemius Expert.

Online shoppers are on the increase, but they also have a better opinion about online shopping. According to the respondents, the biggest advantage of online shopping is 24/7 availability (82 of indications). Further reasons for online purchases are as follows: convenience, understood as no need to visit a regular shop (77 percent), as well as the unlimited time for selecting the products shoppers look for (76 percent).

What could encourage the respondents to shop online even more often are the following two finance-related attributes: lower delivery costs (62 percent of indications), and lower prices than in regular shops (58 percent). The problems that e-consumers most frequently indicate when assessing online shopping include: long waiting time for delivery (38 percent), high delivery costs (37 percent) and annoying advertisement of products that had already been seen by the shoppers (36 percent).

– For the same-day delivery, the upcoming months will be most uncertain. More and more consumers expect this type of service, and the delivery methods used so far are not the only possibilities available today. The biggest e-commerce providers are testing drone deliveries, however this seems like something that will not happen in the near future –  summarises Katarzyna Binert.

The purpose of the study the results of which are presented in the “E-commerce in Poland 2017. Gemius for e-Commerce Poland” report, was to learn about the attitudes, habits and motivation behind online shopping. The report provides information about the attitude to online shopping among people who do or don't become involved in this form of shopping, their awareness of e-commerce brands, motivation behind selection of e-shops, the products purchased and money spent on each category of purchases, plans in respect of online shopping, sources of product information, the ROPO effect, preferences as to the methods of completing online transactions and the use of mobile devices. The report was prepared by Gemius in cooperation with the Chamber of Digital Economy. The survey presented in the report was conducted in the form of a CAWI (computer-assisted web interview) on a representative sample of 1,500 internet users aged 15 plus. The data was collected between 7 and 14 April 2017.