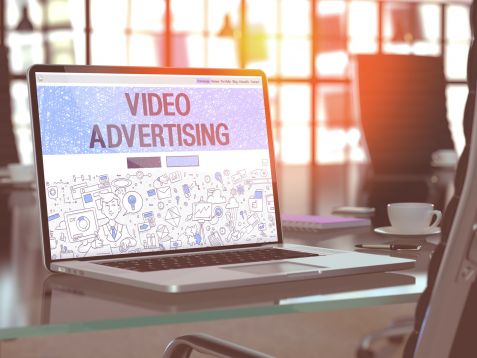 Łowicz, Gillette and Morele.net ─ these brands’ video ads garnered the most Polish internet viewers for February. A Gemius study shows that Łowicz video ads were watched by four million people. The most played creations in the TOP10 were those of YouTube, with in excess of 11 million views.

Gemius analysed which video adverts were most heavily promoted on the Polish Internet. The study takes into account last month’s data collected for internet users aged 7 to 75 on desktop and laptop computers. Among the ten online video advertisements which reached the greatest number of web users in February, clips for FMCG and e-commerce brands stole the show. The lead star is the Łowicz brand (owned by Maspex), whose promotional offerings found their way to 4 million internet users (source: gemiusAdReal). 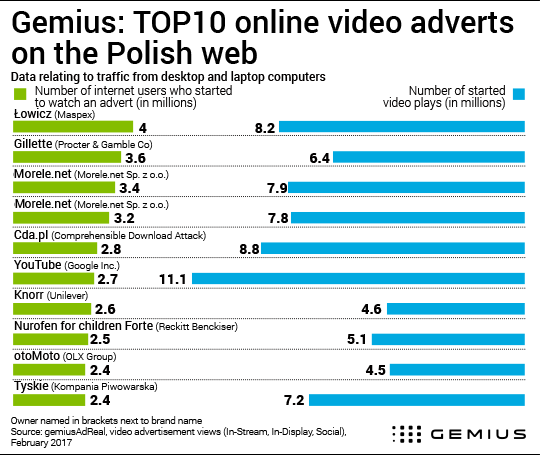 The Top 10 featured as many as three food and drinks brands. Apart from the aforementioned Łowicz, there was also Knorr, (owned by Unilever), whose films were played by 2.6 million internet users, and Tyskie (Kompania Piwowarska) with an audience of 2.4 million. Adverts for FMCG brands also included Gillette videos, which gained a viewership of 3.6 million web users. The Top 10 also featured e-commerce brands. The electronics internet shop Morele.net (Morele.net Sp. z o.o.) shows up on the list with two adverts – one with viewership figures of 3.4 million and another with 3.2 million.

‘After a major campaign which ended in the first half of December, Łowicz struck again on February 1 and for the entire month promoted immunity-boosting jams. In turn, Morele.net began the year with a strong new video campaign which continued into February, and whose ending coincided with the end of the month. Positioning itself as a shop for geeks, Morele.net’s video spot was a co-promotion with the HP brand. It was a campaign on a hitherto unknown scale for this segment of the market, with display operations having previously been the focus. Gillette also began a campaign at the beginning of the year with a funny 30-second spot targeted, of course, at men, which on YouTube was watched for an average 12 seconds. The campaign is continued in March,’ remarks Marta Sułkiewicz, an expert in online video advertising at Gemius.

Among the ten spots which in February reached the greatest number of Polish internet users, the most views were for the offerings of YouTube (belonging to Google Inc.) The website’s video advert was played 11.1 million times. The video spot for Cda.pl (Comprehensible Download Attack), who offer films, games and multimedia, was played 8.8 million times, while the Łowicz film had 8.2 million plays.

‘The ranking also has two strong self-promotional entries. CDA used its own space to promote its CDA Premium service, throwing its hat in the sVOD ring, where such players as Netflix, Amazon Prime and Showmax have already made big entrances. YouTube in turn exploited its own inventory to promote YouTube Rewind 2016, a summary of the cream of films, phenomena and youtubers of the past year,’ the expert adds.

‘Let’s remember that we are looking here at a ranking of videos, which doesn’t necessarily represent the ranking of advertisers, who are increasingly investing in multiple different offerings, creating, for example, different ads for Facebook or YouTube and on mobile devices,’ Sułkiewicz explains.