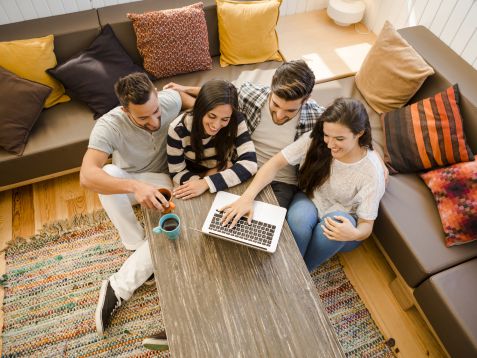 In January 2016 the Netflix website was visited by 338 thousand Polish internet users on PC. However, for the subsequent seven months interest in the website was significantly lower. A Gemius study shows that women are slightly more keen to visit Netflix.com, comprising 52.9 per cent of users, and the most numerous group of users was people from cities with populations over 500 thousand.

2016 was the first year of Netflix being available on the Polish VoD market. To mark the event Gemius conducted a study of traffic at Netflix.com and analysed who was visiting the site. In January of 2016, Reed Hasting’s website received almost 338 thousand visitors, representing 1.5 per cent of all PC internet users in Poland (source: Gemius/PBI study).

By February the number of Poles dropping in to Netflix.com fell to just under 74 thousand. That was when the first free month offered by the VoD supplier came to an end. Visitor numbers remained low for seven months, with the February–August average coming in at 113 thousand. User numbers came to 251 thousand in September and 326 thousand in October. Netflix closed out the year with a user figure of 386 thousand – a reach of 1.65 per cent of internet surfers in December. 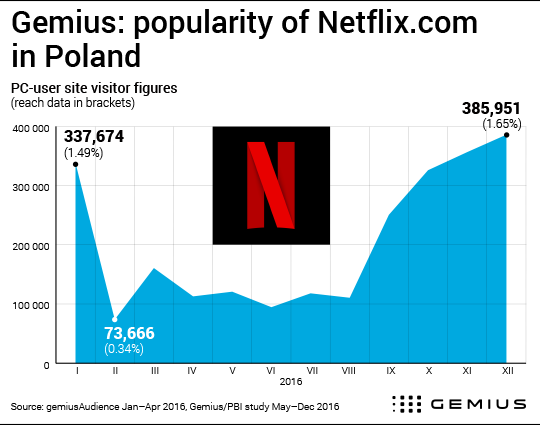 ‘In the second half of 2016, Netflix expanded its provision of films subtitled or dubbed into Polish, improving the accessibility of its service to the average internet user. Together with the typical seasonal trend for VoD services, this brought about an increase in its popularity among Polish web users,’ says Emil Pawłowski, an expert at Gemius. ‘Poles are spending increasing amounts of time watching films and serials on the Internet. There is also a systematic growth in the share of audience willing to pay for a subscription model. Every website which puts out interesting content tailored to local preferences will have the same opportunity as Netflix this autumn to attract a greater web audience,’ Pawłowski adds.

Who are Netflix’s visitors? December figures indicate that they trend slightly towards women (52.9 per cent). The most populous age groups visiting Netflix.com are people aged 25–34 (38.7 per cent), 35–44 (22.5 per cent) and 45–54 (16.2 per cent). Mazowians are the most common visitors by region, constituting almost one visitor in five (19.3 per cent) to the VoD giant. There was a distinct preference for the site among people from cities of over 500 thousand inhabitants. They represented in excess of a quarter (27.2 per cent) of people viewing the site.