The future of Twitter depends on the patience of investors

"Many marketers use Twitter as a complementary communication channel, and this solution works perfectly.Twitter allows you to reach a diverse audience, including politicians, journalists and celebrities" writes Marek Molicki, an expert from Gemius.

Looking exclusively at the numbers, it is difficult to assess the importance of Twitter for the market because, taking only our region into account, the differences in popularity are significant. We should, however, note that if we want to reach concrete, specific, and sometimes niche groups, the choice of a platform such as Twitter can be a much better idea than investing budget or even only time in a much more popular platform. Many marketers use Twitter as a complementary communication channel and this solution works perfectly. Undoubtedly, it is also an important place for politicians, journalists and celebrities, as well as wannabe celebrities (we observe this phenomenon in some CEE countries).

What will happen to Twitter in the future is difficult to judge clearly today, however, because it seems that in the headquarters of the company, led by Jack Dorsey, there is no unanimity. A few weeks ago we witnessed an exodus of people from management, as well as storms related to information about changes in the algorithm and the abolition of the 140-character limit (#RIPTwitter) ­– the topic of the character limit returned. However, I am keeping my fingers firmly crossed for Twitter, because I think that it is an important channel of communication which differs greatly from other social media, allowing access to a somewhat different audience, but also demanding greater efficiency than platforms that do not impose limits or that limit them to a lesser extent (like Linkedin). The future of Twitter, however, depends largely on investor patience (even in February of this year, the analyst Scott Devitt, at Stifel, changed the rating from "Hold" to "Sell") and whether they will want to – no pun intended – invest further trust in it.

The popularity of Twitter.com – what do the numbers say?

Almost every fifth Polish and Hungarian internet user between 15 and 69 years of age has visited the Twitter.com website (source: gemiusAudience, March 2016). This is less than in Turkey. There, the American microblog reaches almost one third of the population of internet users.

The popularity of Twitter in Eastern Europe is, however, shaped otherwise. In Belarus and Romania this website is visited by every tenth network user, and in Ukraine somewhat more – nearly 14 percent of internet users. 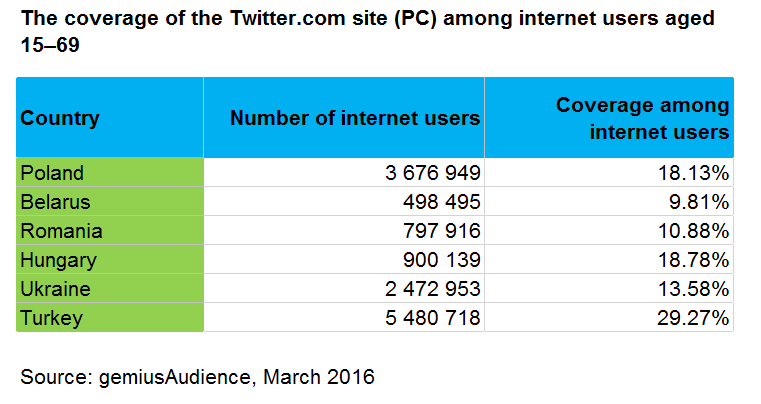