When in 2010 Steve Jobs introduced the first iPad a wave of skepticism spread over the media. However, today, in such countries as Moldova, Russia, Slovenia and Ukraine, iPads are even more popular than iPhones. Read on to learn more about Gemius’ most recent analysis of the popularity of Apple’s mobile devices.

In April 2015 Apple is celebrating its 39th birthday. On this occasion Gemius decided to find out how popular mobile devices are among internet users in selected countries. In order to do so, the proportion of page views of websites visited using Apple smartphones and tablets in March 2014 and 2015 was put under a microscope. Note – the following data only covers the number of page views made with mobile devices. It does not include the number of internet users. 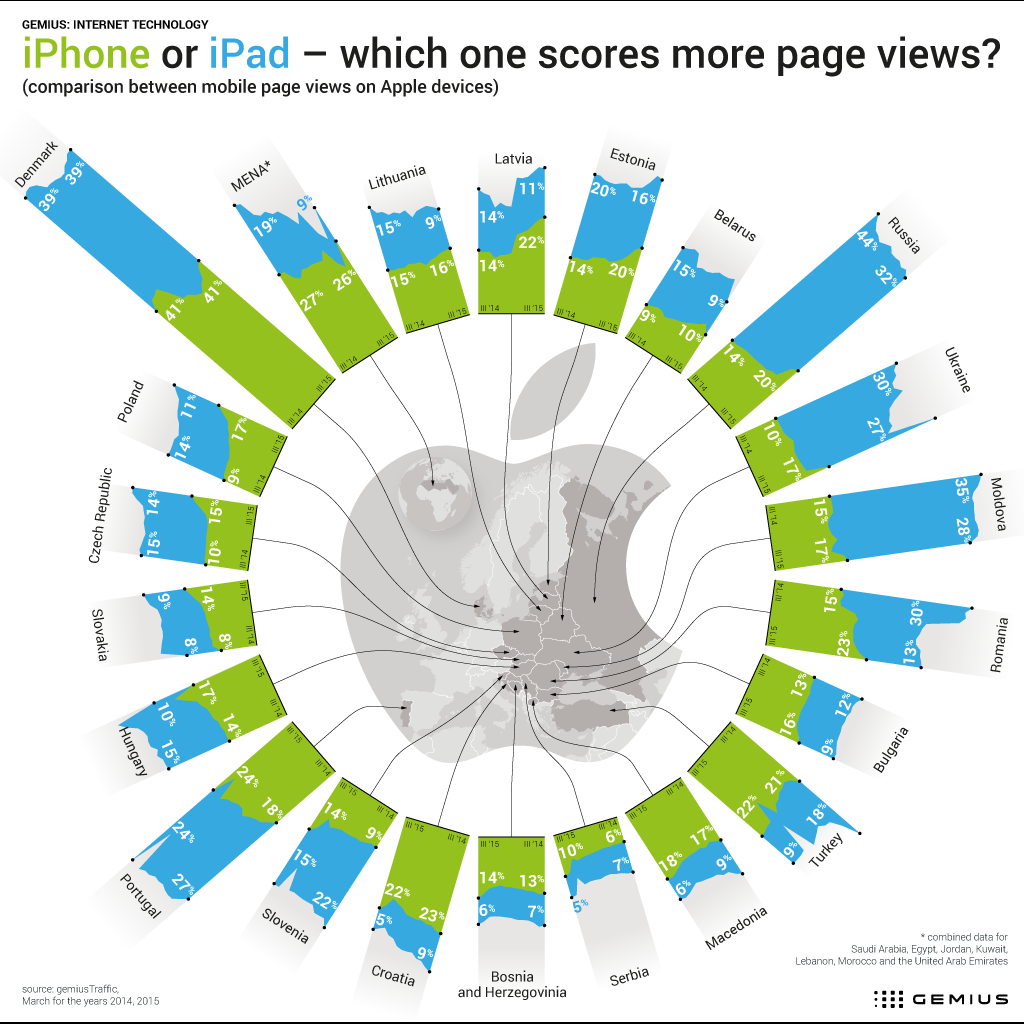 Krzysztof Majkowski, a business consultant at Gemius, believes that in certain countries, such as Russia or Moldova, Apple products appear to be a status symbol, which might explain their large share in mobile traffic (53 and 45 per cent of mobile page views, respectively). – On the other hand, it might result from their market situation and what they offer to their clients. In this respect, other brands might not be as competitively priced, as is often the case in our own domestic market. As an example, if we look at prices – that is the prices established by the manufacturer – of, for instance, Samsung’s flagship models, we can see that they do not differ significantly from the prices of Apple products. What is more – they might be even higher. In the case of the Russian market it is even more interesting, as it is potentially large yet at the same time quite peculiar. It differs from European markets if we consider the key players who take part in it, and, in a broader perspective, how it restricts the internet. One may wonder if the rate of the ruble and the current political situation will affect the market, and if Apple's share in it will shrink or not. However, the historical data shows that there is already a certain trending pattern. Despite the, still, high share of Apple products using Russian mobile traffic, a decrease can be observed in comparison to March 2014.

According to Gemius’ business consultant, after scoring more record-breaking sales in the first quarter of 2015, Apple continues to strengthen its position in the market. – Currently, the future sales of Apple's newest product, the Apple Watch, raises the most questions. So far it looks like it will have a positive impact on Apple’s position. According to a report conducted by Slice Intelligence, Apple received nearly one million pre-orders for the Apple Watch on the first day that it was available for sale. For comparison, 720,000 Android Wear watches and nearly 4.6 million smart wearable devices were sold during the entire year of 2014, points out Majkowski and adds, in the context of the company's condition, it seems that Apple has a bright future ahead. Even if the Apple Watch does not score such a tremendous success as is expected, and iPad continues to lose its significance, with time, resources and undoubtedly a few tricks up its sleeve, Apple will surely surprise us all once again.

Why are iPhones selling better than iPads?

The Gemius’ expert underlines that the sales of iPhone 6 and 6 plus were the best in iPhone's history and for this reason smartphones remain the company’s key segment. At the same time, iPad’s financial result was worse than in the previous year and its sales are decreasing. There are a few reasons for that. – First of all, the iPad’s life cycle is much longer. It is estimated that 48 per cent of users own an iPad that is already two years old. Secondly, these products are used in a different way to smartphones. To illustrate, it should be underlined that iPhones (5s, 5 and 6) and Samsung Galaxy (S4 and S5) smartphones are still the most favoured mobile devices for taking photographs – which is unquestionably the most popular feature on all mobile devices. The third, and equally important reason behind iPad's position is the fact that it is being “cannibalised” by the new, bigger smartphones like the abovementioned iPhone 6 and 6 plus. The question then arises whether the iPad will, in the near future, share the fate of the iPod, or if perhaps the new Apple smartphones will cease to increase in size and the effect of cannibalisation will disappear? It should be remembered that according to Tim Cook, Apple's CEO, the iPad is the first tablet purchased by consumers in the US, UK and Japan; sums up Majkowski.

The above data comes from a website traffic research project (gemiusTraffic), conducted by Gemius in over 20 countries of Europe, Middle East and North Africa (aggregated data for Bahrain, Egypt, Jordan, Lebanon, Oman, the United Arab Emirates, Saudi Arabia, Morocco, Algeria, Tunisia, Iraq, Kuwait, Qatar, Syria, Yemen, Libya and Palestinian Autonomy). The data is gathered with the use of tracking scripts embedded in the code of websites enrolled in the research.