Google Chrome, Mozilla Firefox and Microsoft Internet Explorer – in what European countries are they the most popular? 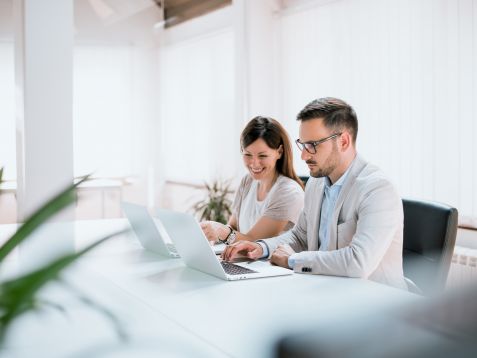 Chrome was the most popular web browser in the analysed region in April 2018. On average, 58 per cent of PC pageviews were generated in the Google browser. Firefox was the second browser in terms of the number of pageviews (18 per cent on average). Internet Explorer landed third in the ranking with average 9 per cent share of views among the analysed countries.

Gemius checked which web browsers were the most popular among the Internet users in selected European countries. In the analysis, we took into consideration the share of pageviews in particular web browsers on personal computers and laptops in April 2018. According to gemiusRanking research, the TOP3 browsers were Google Chrome, Mozilla Firefox and Microsoft Internet Explorer. 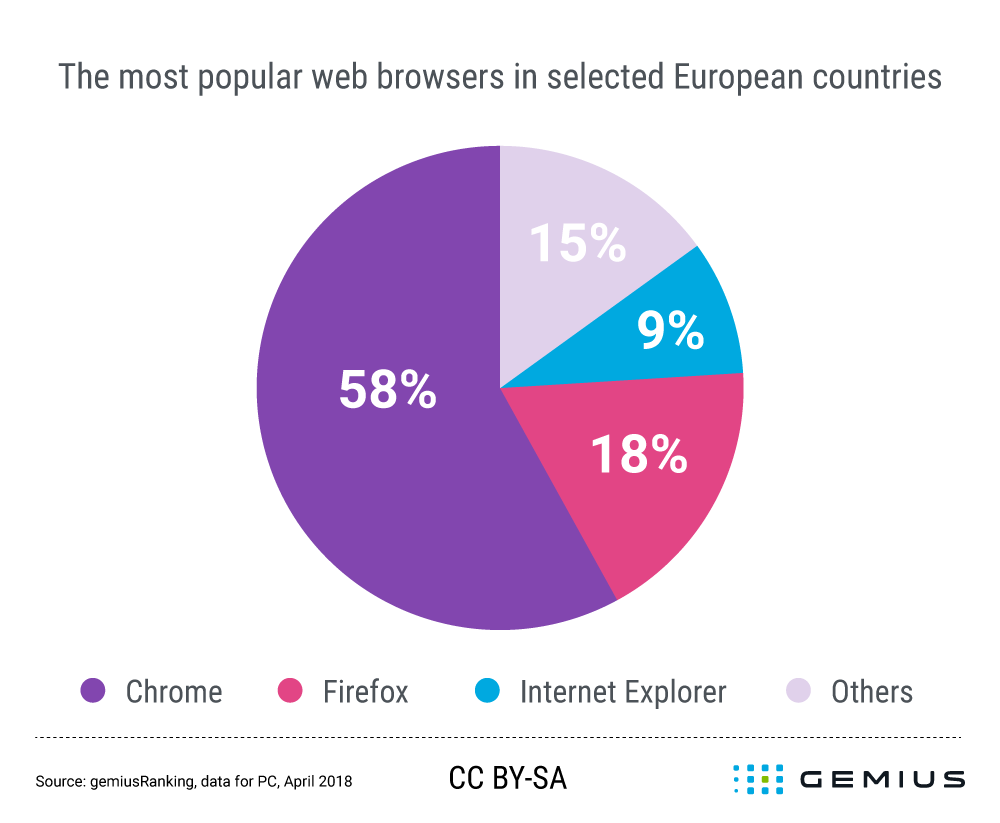 Over 80 per cent of Turkish pageviews were generated in Chrome

Chrome was the most often used browser on PC in the analysed region. More than half of all pageviews came from the Google browser. Chrome generated the highest share in Turkey, around 83 per cent. Moldova took the second place in the ranking with 76 per cent share and the third one was Bosna and Herzegovina with result lesser only by one per cent than Moldova. The TOP 5 ranking closes with Romania (69 per cent) and Serbia (67 per cent). The lowest share of Chrome was recorded in Luxembourg, where the Google browser noted 27 per cent of pageviews. Luxembourg was also the only market where Google Chrome was not ranked first. In the Benelux country, the first place was taken by Firefox with 28 per cent share. 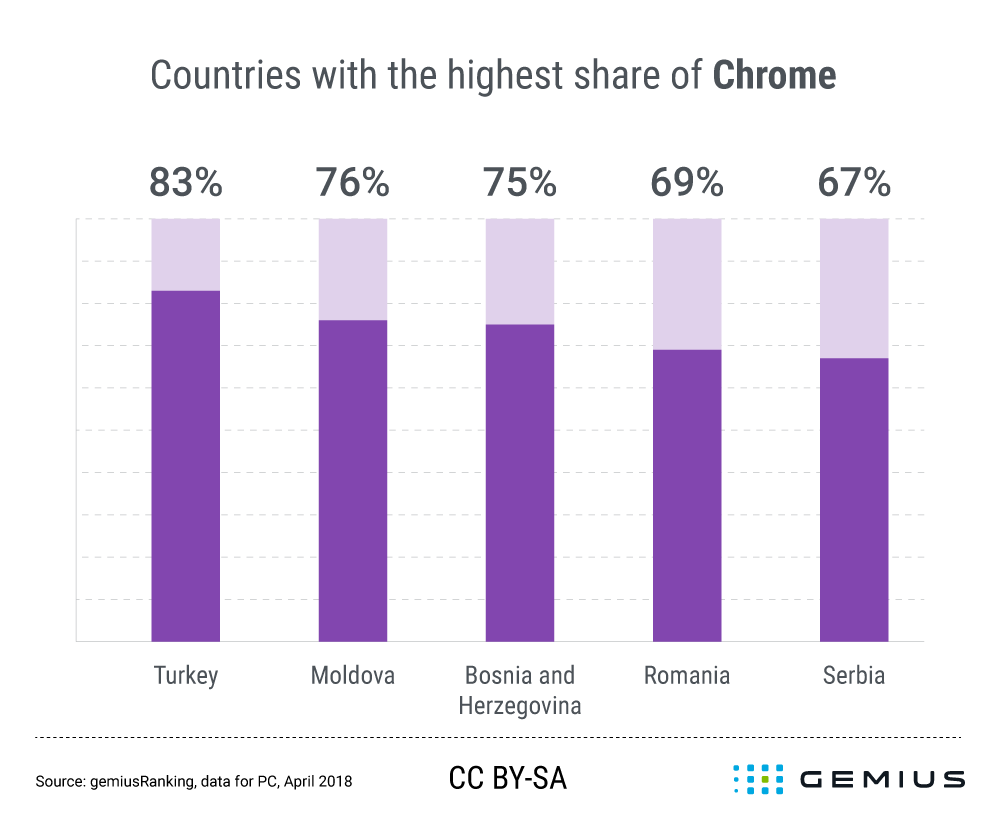 Poland with the highest share of pageviews in Firefox browser

Despite the fact that Firefox was the number one browser in Luxemburg, the Mozilla browser noted the highest share in Poland. Over one third of Polish pageviews on PC came from Firefox. In Hungary the Mozilla browser recorded very similar result as in Luxembourg – 27 per cent. The last two places in the TOP5 ranking belonged to Slovenia and Bulgaria. The results in both countries were slightly different – 24 per cent and 23 per cent respectively. In April the Firefox browser noted the lowest result in Turkey. Only 4 per cent of Turkish pageviews were generated in the Mozilla’s browser. 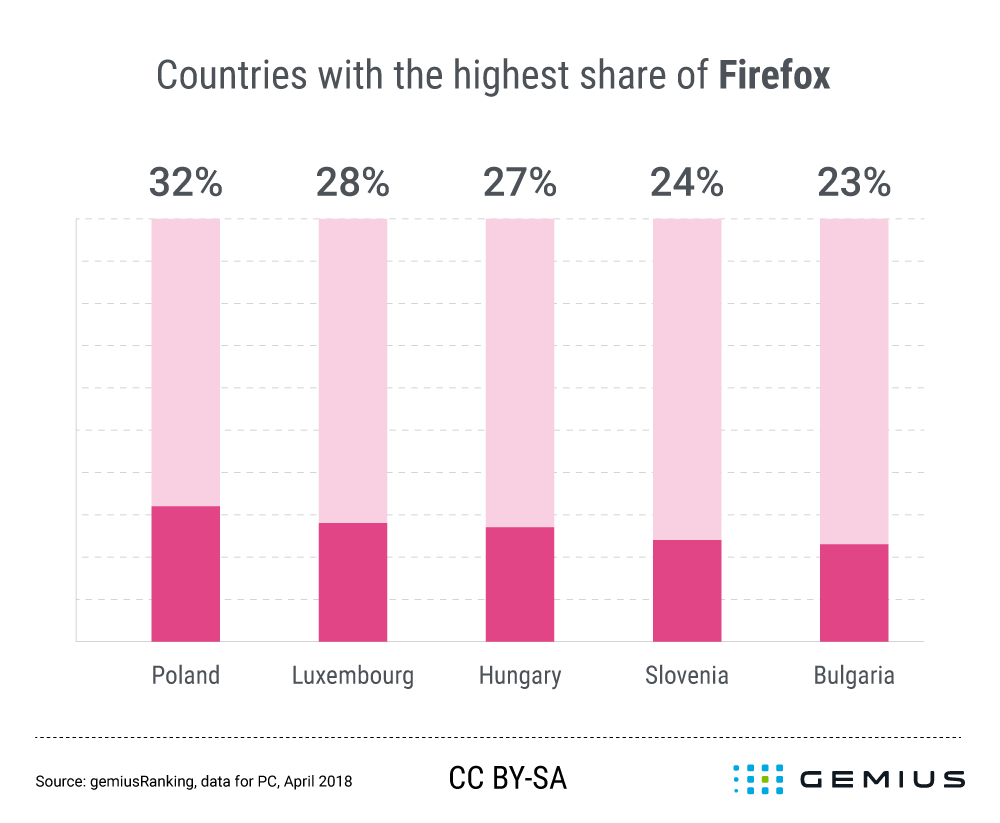 Internet Explorer the most popular in Luxembourg

Internet Explorer was the third in the ranking of web browsers popularity on PC among all analysed countries. In April 2018 the Microsoft browser was highly noted in Benelux countries – 26 per cent in Luxembourg and 16 per cent in Belgium. In Czech Republic almost one fifth of pageviews came from Internet Explorer. Estonia (15 per cent) and Portugal (14 per cent) closed TOP5 of countries with the biggest share of Internet Explorer usage. In Moldova, where Google Chrome noted one of the highest results in analysed countries, only 1 per cent of pageviews were generated in Microsoft browser. 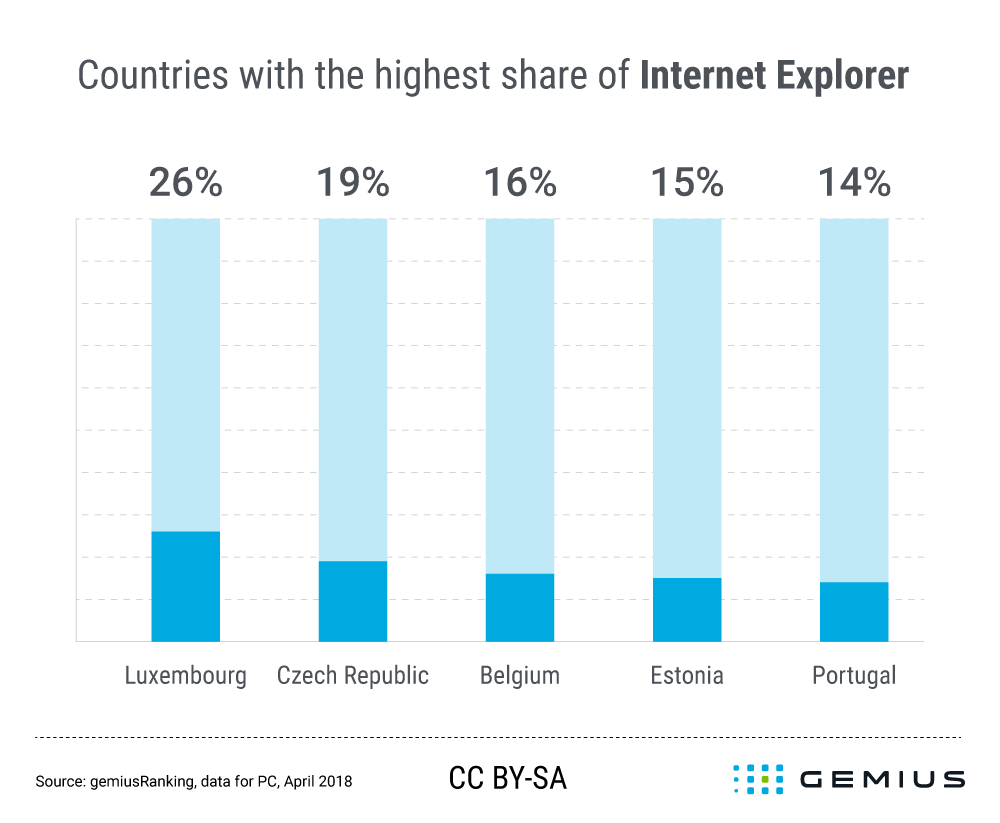