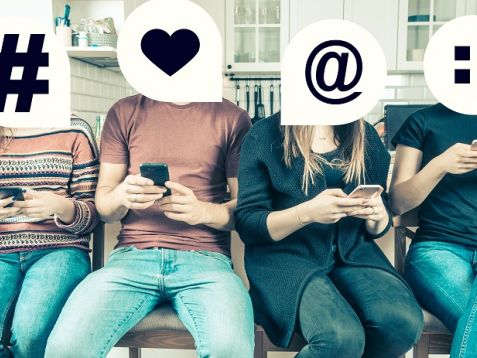 Generation Z is the first generation of real digital natives who were born in a world full of advanced technologies with widespread access to the Internet, which they carry in their pockets. Smartphones are the centre of their lives.

In accordance with the data of GlobalWebIndex, 57% of them feel more insecure without a smartphone than without a wallet (from a report: THE YOUTH OF THE NATION, 2019). The same report also states that smartphone is the most important device for Generation Z as far as Internet access is concerned. Such declaration is made by 78% of Zs; while this number was only 47% in 2015. Smartphone is so important due to the significant aspect of social media life.

The Polish Internet users are no different from the global behavioural pattern really. The Internet on a smartphone is the most important medium for them and they spend the most time using it: nearly five hours a day.  That is about three hours daily more than the older generations of Internet users.

The second most significant reason why Zs use the Internet is watching video content. Streaming media ensure them access to the type of entertainment that Generation Z is used – and which is adjusted to individual tastes and plans. Their appetite for streamed videos is constantly growing. According to the data of Mindshare, over 30% of Internet users have a subscription to some type of VOD service (January 2019). Thus it seems that sVOD services may replace linear TV for the young generation. The demographic structure of the biggest players in this category clearly shows that Generation Z takes up over 50% of their users and it is considerably more than the percentage of the members of this group among Internet users (Affinity Index at the level: 137/149).

Although Netflix is currently the leader in sVOD with binge watching of popular TV series, which they have promoted, as well as content investments worth millions, today it must be revising its strategy for the future. In the age of 'post-peak attention economy' (which is a term coined by the MIDia Research agency), one can no longer hope to benefit from using the consumer's free time. Video offers may only compete for users and share their time; while fragmentation of attention is unavoidable. Leaders of sVOD services are aware of the growing competition and chase clients by investing more and more in production of their own attractive content. These are not just B films and TV series that people watch to kill their time but very high-level material that engages the viewer for many hours. The statistics of nominations to the prestigious Emmy Awards also show that not only quantity but also quality war is raging on. New players, such as Netflix or Amazon, successfully compete with the old guard of producers.

Owing to the accelerating trend for seeking dedicated VOD content, large producers are announcing that they are going to open their own ad-free video services. Disney + and HBO Max energetically enter the sVOD market with attractive own content, taking it away from shelves of Netflix. In the meantime, the local players do not stand idle either. Discovery and Cyfrowy Polsat join forces and promise that they would create a joint sVOD platform competing with the world giants both in terms of technology and content.

Mobile Internet and access to ad-free streamed videos are the most important things for Generation Z. They also do spend time with linear TV though. A single-source study by Gemius shows that it is one hour and 48 minutes daily.

However, reaching Generation Z with content and ads through linear TV broadcasters is the easier part. It is much more difficult to catch their attention. According to IAB Polska's report: “wwwRazem Lepiej” [www Better Together] over 90% of Internet users declare that they use two screens at the same time, which is classic multi-screening, and so shifts attention from one screen to the other. So even if Generation Z is already on the couch in front of the TV, they are usually sitting there with their smartphones in their hands. The basic strategy for avoiding contact with a commercial broadcast on linear TV as well as with uninteresting content is shifting attention to the world in the smartphone. Single-source data show that 46% of people do that. 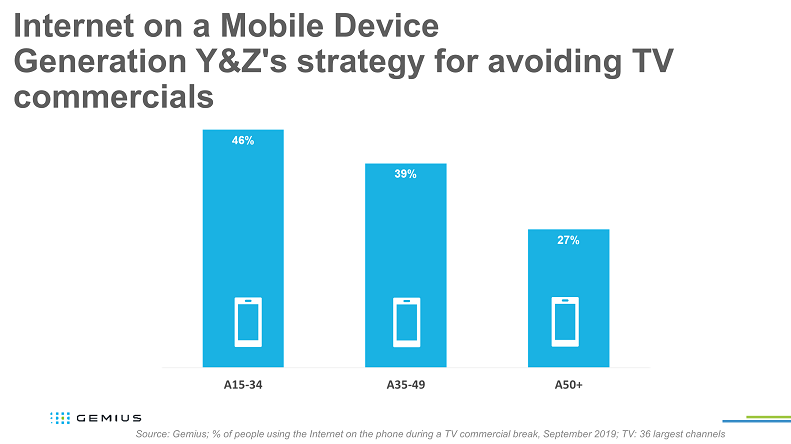 By shifting attention to the Mobile, Zs do not free themselves from ads at all – as they are often shown the very same ads as they can see on TV. Only during the first 16 days of October, Generation Z users received 1.2 billion video ads displays on the mobile Internet, which is 136 views per person. 63% of these views took place in the ecosystem of Facebook (Facebook & Instagram) and 34% on YouTube. Generation Z has also developed an effective way to avoid ads on the mobile Internet: the fast thumb strategy. Its effects are seen when we analyse average video ad contact time on a smartphone: between 3.5 and 4.8 seconds where an ad is skippable. On YouTube, one can see the effect of unskippable pre-rolls, that is, 12 seconds. 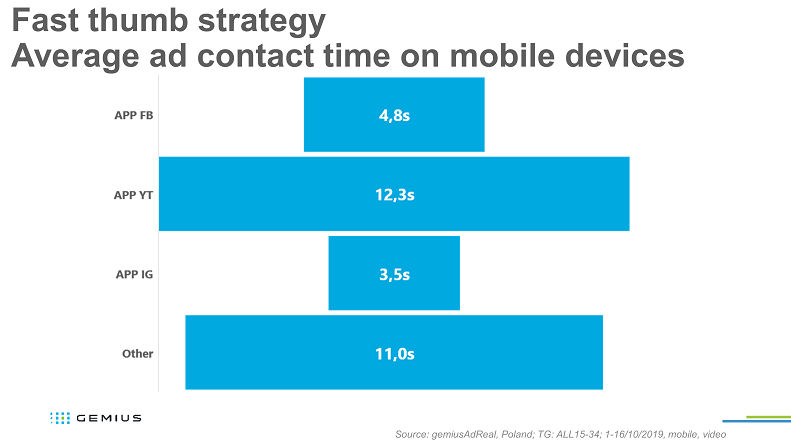 What does it mean for advertisers? First and foremost, it means that there is no use putting a 30-second TV commercial on Facebook. And that one needs to have a well-thought-through content strategy in order not only to build up reach among Generation Z but also to catch their attention.

The biggest advertisers know that very well already and develop diversified communication depending on the platform taking into consideration the video consumption habits of the young generation.

The content strategy pursued by multiple international and local brands also consists of following the consumer and their favourite TV series. Since young viewers have started leaving linear TV for ad‑free streaming VOD services, producers and advertisers more and more boldly invest in product placement. Brands still want to reach the viewers of Netflix for which it is an obvious way to lower production costs. Will traditional linear media lose because of that? Televisions must certainly prepare for budgetary cuts to keep my fingers crossed for the local publishers to effectively compete with the world giants in the midst of the sVOD trend. Not letting the Polish viewers disperse is a solution that is beneficial for the publishers as well as the advertisers. 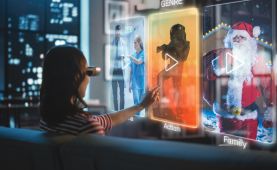 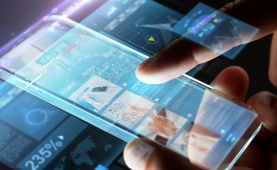