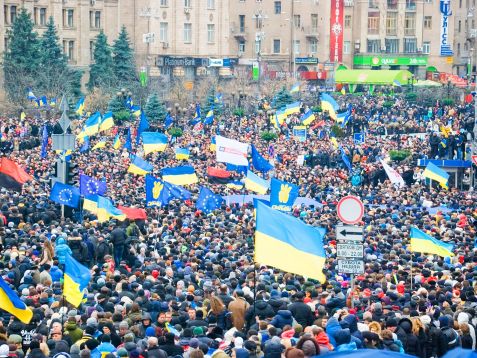 As a result of the political events in Ukraine, an increase in the online traffic was noted on Facebook and Twitter, news services and non-public TV stations. Local players, i.e. VKontakte, Odnoklassniki and public televisions stations websites were lagging behind – Gemius analysis shows.

As recently as in November 2013, Ukraine was one of the countries researched by Gemius where Facebook did not enjoy much popularity. At that time, Facebook.com was visited by 3 in 10 internet users (28.5 per cent). In this respect, Ukraine surpassed only Belarus, where this share amounted to 20 per cent (19 per cent). The night of 21 November 2013 saw the onset of a protest at the Kiev Independence Square that soon grew into Euromaidan, a wave of demonstrations that shook almost all of Ukraine, and the social media. How did the political unrest influence online traffic?

A day-by-day analysis of internet users' activity over November, December and January also shows that during the Euromaidan events, users were spending increasing amount of time on social networks.

In October 2013, research showed that Facebook.com was entered by only 29 per cent of Ukrainian internet users, which was almost twice less than the VK.com result (61 per cent). However, in January 2014, the visits indicator grew up to 32 per cent. Twitter gained on popularity, too. In January 2014, the microblogging service was already used by over 13 per cent of internet population. Before the protests, in October 2013, only about 10 per cent Ukrainian online users expressed their interest in the site.

While the international services were gaining on popularity, Vkontakte, the largest social network in Ukraine was in fact losing ground (up to the late 2013). Even in October last year, i.e. before the protests began, VK.com was visited by over 61 per cent of online population, but in December it was already slightly less than 58 per cent. The site, however, got back in saddle after the January events at the Maidan, finally reaching a result that was even better than before: 62 per cent. What was happening at the Maidan did not, however, have any notable effect on the popularity of odnoklassniki.ua.

A day-by-day analysis of internet users' activity over November, December and January also shows that during the Euromaidan events, users were spending increasing amount of time on social networks. This is especially visible in the traffic analysis concerning twitter.com (39 minutes in October 2013 v. 1 hour 26 minutes in January 2014).

The same goes for news services. In January 2014, such websites were visited by nearly 51 per cent of internet users, which is almost 5 percentage points more than before the protests (46 per cent). Keeping up-to-date with online news took them almost exactly twice as much time (3 hours and 3 minutes) as in October (1 hour and 31 minutes).

Online TV and online streaming instead of traditional telly

During the unrest, also the Ukrainian online TV stations emerged from nothingness. As recently as October and November the popularity of this type of services was scarce. In December 2013 the websites of a few leading stations were already visited by about 10 per cent internet users in total. That result grew to 15 per cent in January 2014. In the same period, the popularity of websites belonging to public TV was dropping. In October  2013 they were visited by nearly 14 per cent of internet users, but in January next year it was less than 12 per cent.

The data presented is taken from the results of an international research project carried out by Gemius in over 30 countries of Europe, Middle East and North Africa (gemiusAudience). The research aims to identify the number of internet users, specify their socio-demographic profiles, and define the manner in which they use the internet. The research is conducted in compliance with the ICC/ESOMAR code.