Does revolution await the advertising market? This is the question addressed by Radosław Gołąb, Director of Advertising Business Development for the EMEA region at Gemius.

Revolution is a very significant change taking place in a short time and usually accompanied by unrest. It does not generally bring any good with it. From the perspective of the advertising market, sudden changes are certainly not what either advertisers or advertising agencies would wish for.

So when it comes to mobile, what we are observing is more of an evolution rather than a revolution. How many ground-breaking and discovery-laden years we have already labelled “the year of the mobile”! For at least four years the year ahead has been so hailed, but “the year of the mobile” will not come about. It will never happen that everyone suddenly ditches their PC for a mobile device. It will happen gradually. And advertisers will act in the same manner. Budgets for mobile advertising will grow year on year, but I do not expect huge changes in strategies. It will instead be a natural path, which means that the money will follow the users. And to all intents and purposes that is what is already happening.

In a time of responsive pages and advert creation in HTML5 it is simply not possible to talk about separating out PC and mobile campaigns. These worlds have become so merged that practically every campaign is accessed across all possible devices. Because how does a laptop differ from a tablet touchscreen? Adverts display on them in exactly the same way. It is the same with telephones – HTML5 technology, which has entered the world of advertising, has effectively wiped away the borders between devices, so we now need to talk about multiscreen campaigns. Distinguishing between devices will essentially cease to make sense. What matters is to reach the particular user, and not the screen on which the user meets the advertisement.

Approximately 22 per cent of Polish internet traffic is from telephones and tablets, and this percentage is growing steadily. As I mentioned earlier, users’ changes in device usage will be followed by changes is advertising budgets. The latest report of the IAB shows that 18 per cent of internet advertising expenditure goes to mobile. We will soon be witness to further increases in mobile, though the changes and growth will not be revolutionary, but decidedly evolutionary. 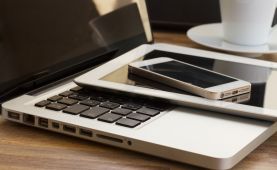 On which devices do internet users watch advertisements?